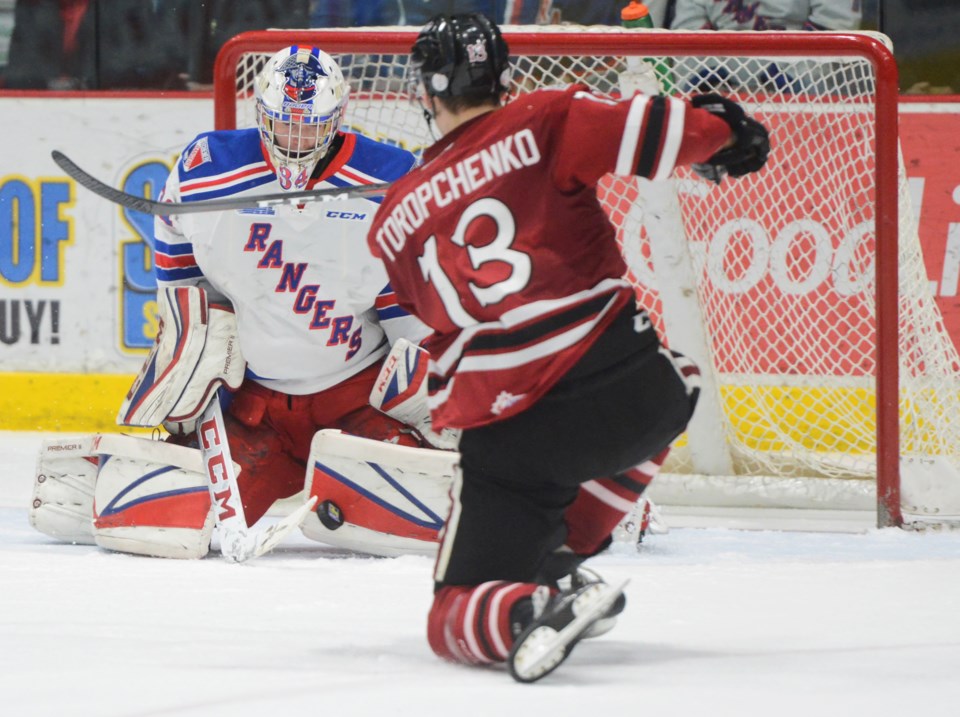 Luke Richardson makes a save on an Alexey Toropchenko one-timer Sunday at the Sleeman Centre. Tony Saxon/GuelphToday

Nothing went well for the Kitchener Rangers.

The Guelph Storm scored just three minutes into the game to take the early lead; 1-0.

Rickard Hugg, who only had four penalty minutes all year, picked up a misconduct when he squirted his water bottle towards an opposing player from the bench.

“It’s hard not to get emotional at the beginning of a game,” said Kitchener head coach Jay McKee. “To have our captain get a ten-minute misconduct, we know we have a lot of young players – especially upfront, we can’t be losing one of our top players for ten minutes in the opening period of a game.”

“It was stupid,” said Hugg. “I lost it for a second and it cost me and my team for ten minutes. It’s hurting my team, and it’s hurting myself. It was a stupid play by me.”

A spinning-shot from the top of the circle hit a Rangers’ defenceman, off to the side of goaltender Luke Richardson, and went in; 2-0.

A cross-ice pass banked off a defenceman and beat Richardson who was sliding post-to-post; 3-0.

A second swipe in front of the net with just 15 seconds left on the clock; 4-0.

Hang in there, we’re still in the first period.

“Guelph’s execution was much better than ours early in the game. That’s on us as a staff to have our guys more dialed in,” said McKee. “When they go out there, the execution has to be clean. When you’re the underdog, it’s supposed to be hard. You have to embrace the difficulties, the challenges and the adversity.”

Hawel, Isaac Ratcliffe and Alexei Toropchenko would also add markers and the Storm destroyed the Rangers 7-0 in Game 2.

There’s a saying, “A series doesn’t start until the home team loses.”

Kitchener tries and keep the constant going when the series shifts to The Aud.

“Coming home, having the crowd behind us and playing in our home barn means a lot,” said Hugg. “I don’t think we’ve been playing a whole game the way we want to yet, so we have to fix that.”