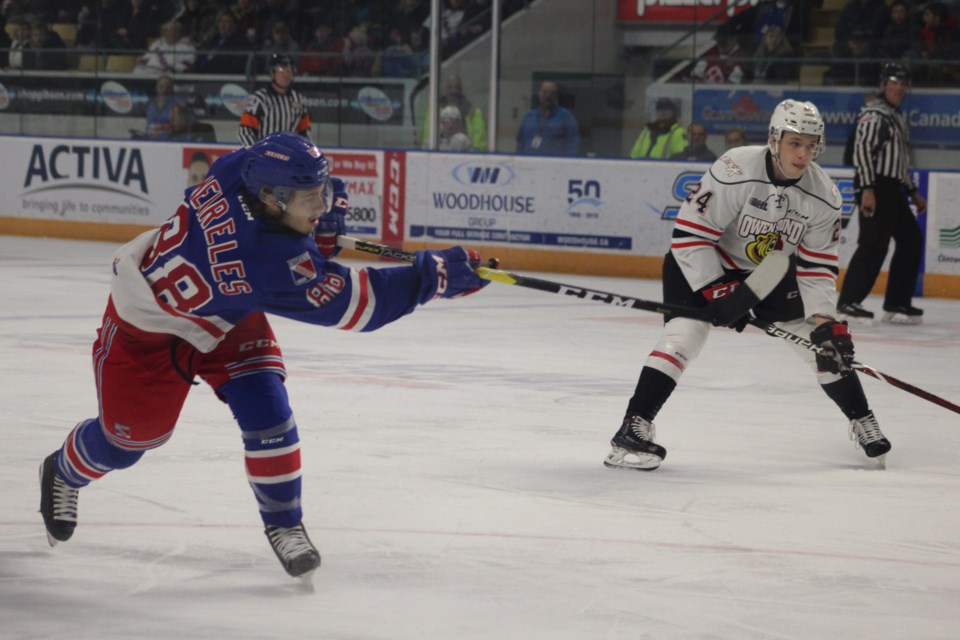 OHL Player of the Month – Greg Meireles (Kitchener Rangers):
Kitchener Rangers forward Greg Meireles has been named the OHL Player of the Month for March, finishing tied for the league lead with 18 points including five goals and 13 assists over eight games. Meireles recorded points in all eight contests as part of an ongoing 20-game point streak, the OHL’s longest of the 2018-19 season. The 5-foot-11, 188Ib centre recorded at least three points three different times including a three-assist showing on Mar. 1st against London, a goal and three assists in an 8-4 win over the Erie Otters on Mar. 8th followed up by a goal and two helpers on Mar. 10th in Guelph. Meireles potted a pair of power play goals to help the Rangers’ top-ranked power play finish the season with a 29% success rate, the league’s highest since the 2016 Memorial Cup champion London Knights. He also had a hand in helping teammate Jonathan Yantsis reach the 50-goal mark, assisting on four of his goals in the month of March.

A 20-year-old native of Ottawa, Ont., Meireles finished the season as Kitchener’s leading scorer, recording 97 points 36-61–97) over 68 games, 43 of which came on the man advantage. Meireles led the Rangers with 249 shots on goal this season and went 54.1% in the faceoff circle. The former first round (12th overall) pick of the 2015 OHL Priority Selection remains without an NHL contract but attended rookie camp with the St. Louis Blues in 2017.