The Kitchener Panthers will play the Barrie Baycats in the Championship series for the third year in a row
0
Aug 25, 2019 5:30 AM By: Mark Pare 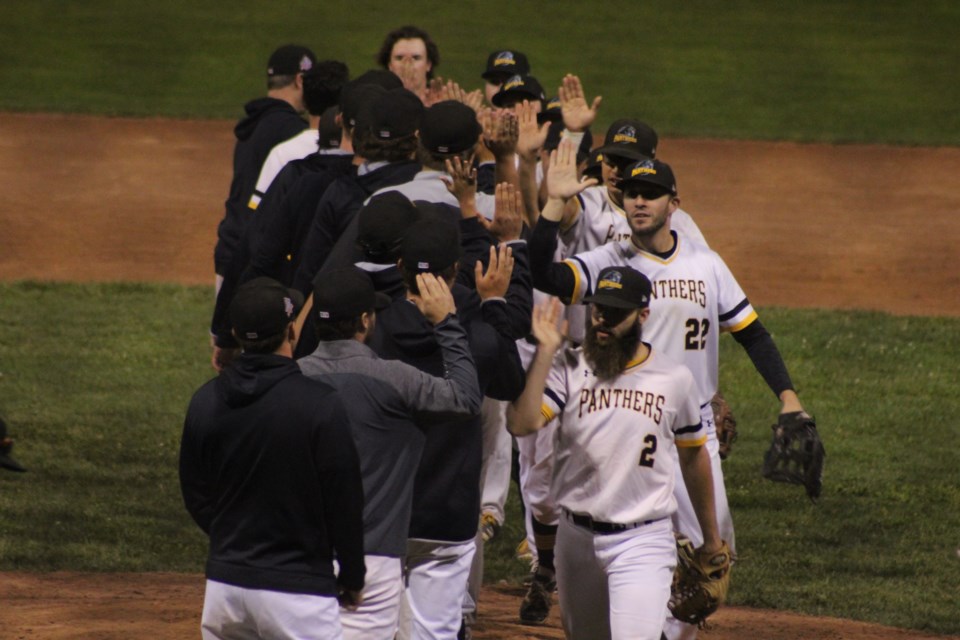 Everyone loves a good trilogy.

For the third year in a row, the Kitchener Panthers and Barrie Baycats will meet in a best-of-seven series to determine the Intercounty Baseball League Championship.

And from the get go, you could tell Kitchener was on a mission.

Three doubles to kick off the bottom of the first inning scored two runs, and in the clean up spot, Brian Burton did it again.

A two-run home run --- the fourth straight game Burton has went deep --- before a single out was recorded, and suddenly, it was a 4-0 game for the home side.

“The bats were on fire,” says Baker, “To start a game like that, obviously gets the bats going, gets the guys fired up and it was just a real nice way to start the game.”

“We really wanted to put the pedal to the metal today against Hamilton, didn’t want to give them any breathing room.  We knew for sure they were going to come out firing.  Any team with their back against the wall, they’re dangerous.  Hamilton’s a good team.”

The Cardinals, however, just couldn’t get things rolling against Miguel Lahera, who made a rare appearance as a starter.

Lahera --- usually a closer --- went six innings, allowing just one run while striking out two and was credited with the win.

Baker says the start was an effort to get Lahera some innings, as he wasn’t playing as much over the last number of games.

Speaking of getting some innings in, the Panthers used five pitchers throughout the night --- including an inning from Jr. Panther David Bruinsma --- and they all kept Hamilton off the board in the final three innings to seal it.

Those other pitchers being Christian Hauck, Matt Vickers and Mike Schnurr.

But again, it was the top half of the order doing plenty of damage for Kitchener.

Tanner Nivins delivered a two-run home run of his own in the fifth, as part of a three-for-four night at the plate.  Liam Wilson also had three hits and Colin Gordner snatched an RBI while advancing to first on a dropped strike three call in the seventh.

Zarley Cina hit a sac fly to centre field in the third to round out the scoring.

Chris Lazar was tabbed with the loss, going just three innings before he was tossed from the game soon after his final pitch.  He was seen arguing with an umpire on the third base line, closer to the plate, and moments later, he could be seen walking out of the ballpark.

But with the win, it will be the Panthers and Baycats to decide the Jack and Lynne Dominico Trophy.

“Last year was a real good year for us, we played very well, got to the sixth game, it was a tough loss in the sixth game but that’s why we play the game,” says Baker, recalling the six-game series from 2018, the final one decided at Jack Couch Park in a barnburner of a game.

And this year, the two teams seem relatively even.  Both finished the year 25-11, but Barrie will have home-field after they won a one-game showdown for the pennant earlier this month.

And you know they will be locked in, as the Baycats look to match Brantford with an IBL record sixth straight championship.

Kitchener hasn’t won the crown since 2001.

“We want to come back.  We want to do our best to take those giants out,” says Baker, “They’ve been absolutely unreal the last five years, and again this year, they’re the top team as you kind of expect.  We’re hungry, we want it and it’s up for grabs, and it’s up to us to continue to keep on the path we’re on.  Hopefully we can keep working the bats and keep our heads straight and focusing on the right things.”

“If we can keep that focus, we’re going to be good.  At least give ourselves the best shot.”

The IBL Finals schedule has yet to be released.