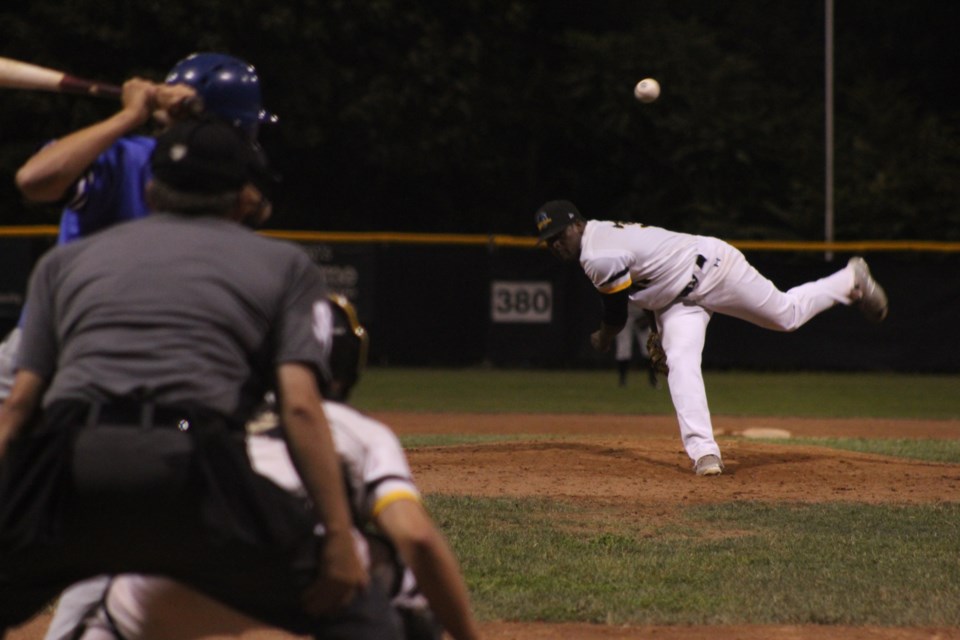 Kitchener Panthers pitcher Yoennis Yera throws to the plate during Game 1 of their 2019 first round IBL playoff series with Toronto. (Mark Pare/KitchenerToday)

It wasn't easy, but the Kitchener Panthers started off their IBL playoff run on the right foot.

A four-run eighth inning propelled them to an 8-4 win over the Toronto Maple Leafs in Game 1 Thursday night from Jack Couch Park.

"That was a battle right to the end," says Panthers Manager Luke Baker.

"It was nice to see our guys push through.  We had a couple really good chances bases loaded, and didn't come through at those times.  But we were able to come through with the clutch hits and make some things happen, so it was very nice for a Game 1, definitely what we wanted."

The Panthers finished second with a 25-11 record, nine games better than the Leafs.  But Baker knows the Leafs aren't going to be an easy out, noting their six-game win streak coming into the postseason.

Among those Leaf wins, a 4-2 decision over the Panthers last Thursday in Kitchener.

"They looked really good," he said of Toronto's effort in Game 1, "We do not want to take these guys lightly and give up anything at this point.  We have to keep the foot on the pedal."

Yorbis Borroto lead the way for Kitchener, going three-for-three and gathering four RBI.  He opened the scoring with a two-run double in the third.

But that lead evaporated after Toronto's Justin Marra and Marcus Knecht hit back-to-back home runs in the fifth --- Marra's was a two-run shot --- to take the 3-2 lead.

Fast forward to the seventh with Colin Gordner up to bat.  Leafs relief pitcher Jean-Carlos Henriquez was called for a balk and Andy Leader was able to cross the plate to tie the game.

A moment later, Gordner hit one to the shortstop, who made a great play to get it over to first for the out.

But from the press box, it looked like the first baseman came off the bag and that drew Baker out to the field.

After arguing his case and a meeting of the umpires, the call was reversed and Leafs Manager Peter Topolie to come out.  Catcher Justin Marra also jumped in to argue the call for a few moments, but cooler heads would prevail.

The next batter was Liam Wilson, who gave the Panthers their lead back, a lead that was short lived when the Leafs' Cooper Lamb hit an RBI single to centre field in the eighth.

But in the bottom half of the inning, the hit parade was on for the home side, with some help to some fielding errors by the Leafs.

Leader drove in the eventual winning run after the Leafs shortstop couldn't track the ball.

And with Borroto next up, a passed ball allowed runners to advance to second and third.  The next pitch was driven to the warning track, scoring both runs.

Wilson hit an RBI single a couple batters later to round out the scoring.

Yoennis Yera got the start, his first action for the Panthers since representing Cuba at the Pan-Am Games in Peru.  He struck out nine batters in six innings, scattering three runs on four hits, while walking five.

Baker liked what he saw, and commended Yera's composure after the back-to-back home runs.

"Looked fresh, looked sharp, looked like he really wanted it, which was great, and it was really nice to have him back," Baker said, "We're super happy to have such good pitching and guys representing their countries, I thought that was pretty cool, got a chance to watch him while he was pitching."

"But I like watching him here better," he said with a laugh.