The Golden Hawks soared to a five-stroke victory over the Ottawa Gee-Gees on Tuesday afternoon at Angus Glen Golf Club
0
Oct 9, 2019 9:21 AM By: KitchenerToday Staff 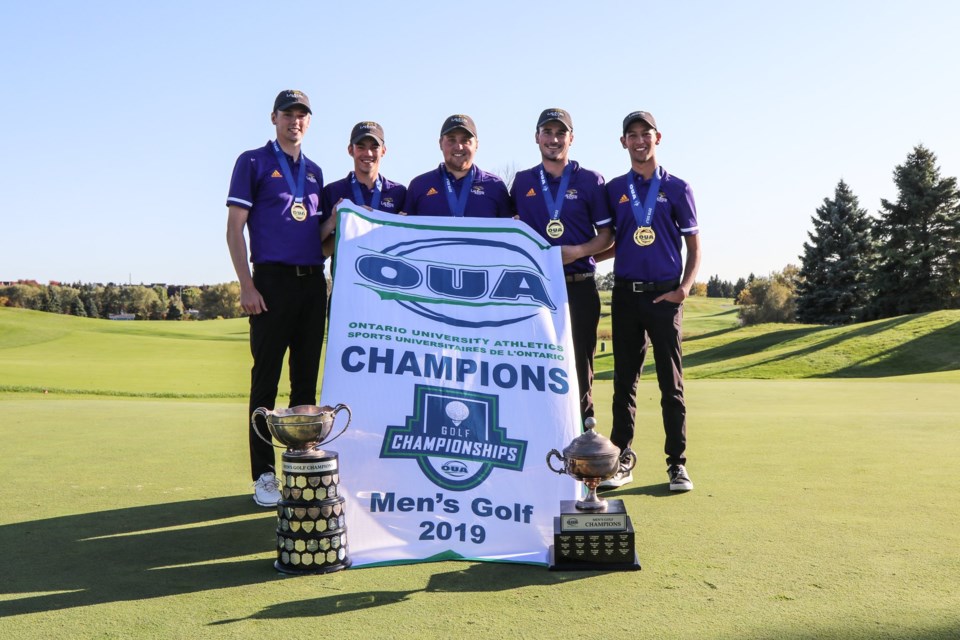 LAURIER ATHLETICS
NEWS RELEASE
**************************
For the first time in school history, the Wilfrid Laurier Golden Hawks men's golf team are OUA Champions as the purple and gold soared to a five-stroke victory on Tuesday afternoon at the Angus Glen Golf Club.

Trailing the Ottawa Gee-Gees by three strokes after Round 1 on Monday, Laurier put together the best round on Day 2 of the championships. The Hawks fired an 11-over par 299 to finish at 21-over par 597, five shots ahead of the Gee-Gees, to capture the Ruttan Cup for the first time in the 35-year history of the Golden Hawks men’s golf program.

Leading the way for the Golden Hawks was fourth-year Jaron Brown of Thornhill, Ont. The communications studies major capped what was an incredible season by winning the Len Shore Trophy as the 2019 OUA individual gold medalist, the fourth individual medal he’s won this season. Brown shot a two-day total of one-over par 145 to edge out three other golfers for the top spot on the leaderboard, including teammate Ryan Murphy of Ancaster, Ont.

"It feels amazing," said Brown. "It's my fourth year playing OUA golf for Laurier and to finally get our first team title is extremely important for us. It was also great to top it off with an individual win. The key to winning was just perseverance - not getting upset if you hit a bad shot and just grinding it out until the very last hole."

Head Coach Jeff Colley, in his sixth year leading the purple and gold, was named OUA Men’s Coach of the Year for the first time in his career after guiding the Hawks to their third team gold medal of the season.

Other Golden Hawk results included Henry Luel of Oakville, Ont., and Jonny Cramton of Toronto, both earning Top 20 finishes with Luel tying for 16th at nine-over par 153 while Cramton was tied 20th at 10-over par 154.

Fifth-year Andrew Cox of Kitchener, Ont., rounded out Laurier’s team finishing at 12-over par 156 to tie for 28th.

In the women’s event, the purple and gold put together their best team finish since 2015 as they captured fifth overall at 98-over par 530.

with files from the OUA