After five seasons with the Laurier Golden Hawks, defensive tackle Sam Acheampong is aiming for a role with his hometown Toronto Argos this season
May 5, 2020 6:00 PM By: Mark Pare 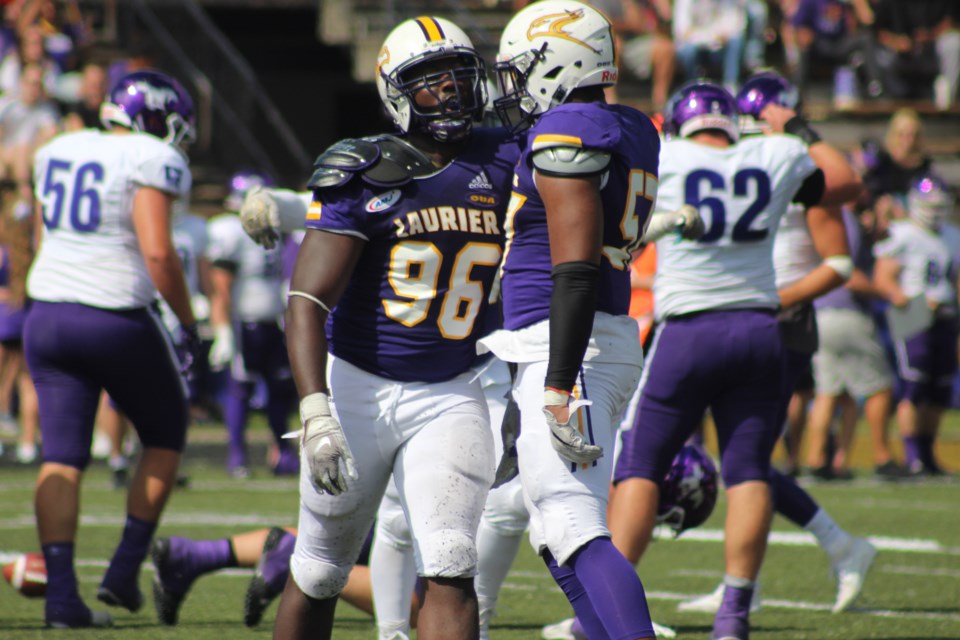 Another Laurier Golden Hawk is ready to turn pro with the Toronto Argonauts.

And based on the excitement in his voice, defensive tackle Sam Acheampong can't wait to get to CFL training camp, whenever that date may be.

Acheampong, a Brampton native, was drafted by his hometown team in the second round of the CFL Draft last Thursday.

"I came back (to Brampton) for the night, just to be around my family for good energy," he said about how he spent draft night, "As soon as I heard my name called, everybody was yelling ... it was pretty fun."

The well wishes came from all over.

"People I haven't talked to since high school (have reached out)," he said, "It took me a while to get back to my coach, and stuff like that."

Acheampong says he wasn't sure where he was going to go, admittedly getting a little anxious as the picks came in.

But when Toronto finally took him 20th overall with their territorial pick, the 24-year old says he was relieved.

Toronto is looking to move up in the CFL world.

After winning the 2017 Grey Cup, they've had a fall from grace with two consecutive 4-14 seasons.

Amid those less than stellar campaigns came defensive woes, second last to Ottawa in a number of categories.

Acheampong is coming off his best season statistically with Laurier, achieving career highs in tackles (19) and sacks (5.5) and was named a OUA First Team All-Star.

He says from what he's hearing from the Argos, there's the feeling he can come in and compete right away.

"They see me as a very versatile player and a quick defensive lineman," Acheampong said, "They didn't think I would be around by the 20th pick, so they were really excited about that.  They got themselves a baller."

A baller that will have a number of Laurier alumni around him, including Toronto's first rounder from a year ago, fellow defensive lineman Robbie Smith.

"It's a pretty cool thing," Acheampong said, "(Smith and I) were roommates since first year together."

He calls getting drafted "one of the greatest accomplishments of my life, so far," but acknowledges the work is not over.

He knows in order to make the jump to the CFL, he has to continue learning and absorb information "like a sponge," and put in the work at home until there's more clarity on how the league is approaching the 2020 season amid the pandemic.

"I have a barbell at home, and I just try to utilize what ever I have around me," he said, "If there's a season or not, that's out of my control, so I just have to control what I can.  That's just my work ethic."

"I just have to hope for the best, and then keep my head down and work, even if the season is next year, or if it's September, I have no idea."

No OUA sports this winter
Oct 15, 2020 2:23 PM
Comments
We welcome your feedback and encourage you to share your thoughts. We ask that you be respectful of others and their points of view, refrain from personal attacks and stay on topic. To learn about our commenting policies and how we moderate, please read our Community Guidelines.