Laurier drops a spot in U Sports Top 10 football rankings

Wilfrid Laurier falls to fifth in the latest rankings after their loss to Waterloo over the weekend, while the Warriors were selected as an Honourable Mention
0
Sep 18, 2018 1:58 PM By: Mark Pare 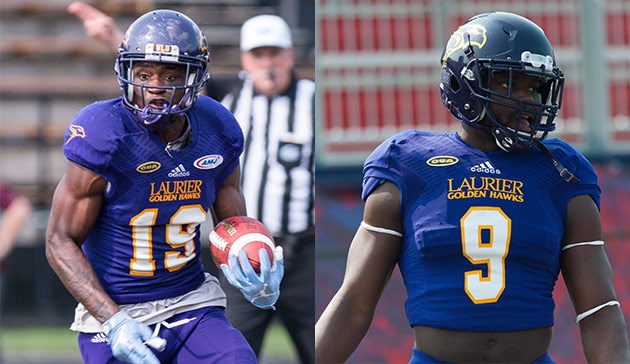 Laurier's Kurleigh Gittens Jr. and Robbie Smith are among the top prospects for the 2019 CFL Draft (Photo Credits: Jeff Hutter

After losing to the Waterloo Warriors for the first time in 16 years this past weekend, it was unsurprising to see Wilfrid Laurier fell down the list of the top university football teams in the country.

The latest U Sports football Top 10 list was released Tuesday, with the Laurier Golden Hawks moving down a spot from fourth to fifth.

The Western Mustangs remain on top of the list, followed by Laval and Calgary.

The Guelph Gryphons also held onto their spot in 10th.

Waterloo also got some recognition, tabbed as one of five Honourable Mentions for the week.

Week 4 action starts Saturday in the OUA, with Waterloo hosting Western and Laurier on the road against McMaster.

Guelph, meantime, is home to Queen's.