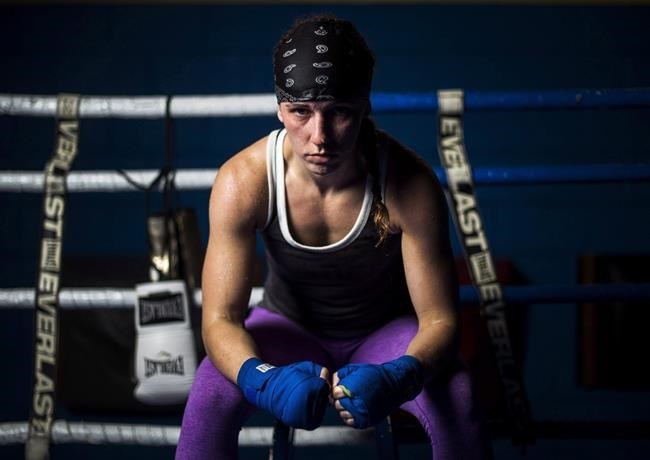 After a competitive year wiped out by COVID-19, the 11-time national flyweight champion from Kitchener, Ont., had hoped to fight her way into an Olympic berth at the Americas Olympic qualifier scheduled for next month in Buenos Aires. But amid rising cases of the global pandemic in Argentina, the event was cancelled on Thursday.

"To say I'm heartbroken would be an understatement," Bujold tweeted.

The 49 quota spots slated to be awarded at the event will now be allocated via IOC Boxing Task Force ranking.

Bujold doesn't have the ranking because she took time off to give birth -- her daughter Kate was born in the summer of 2018 -- and then the pandemic wiped out last season's schedule. She has had top-three podium finishes since her return from childbirth, but none in events that contributed to the selection rankings.

"There were literally three events in the last 16 years I didn't attend, and of course, those are the three that are being considered for ranking points," she said.

The two-time Pan American Games champion wasn't seeded for the Olympic qualifier, but she said "I was confident that I could fight my way to the top four and then qualify myself.

"Now they're taking away that only opportunity that I have to actually be able to prove that hey, I'm still here. I didn't go anywhere. That's the most frustrating part is not being able to actually prove, and (show) all the work that you've been putting in. . . . All the training camps and all the money and the time. Oh, man, it's just unreal."

The continental qualifiers were originally scrapped last March due to the global pandemic.

Bujold would be the first female to box for Canada at consecutive Olympics. An illness derailed her dreams at the 2016 Rio Games. Hours before her quarter-final loss to China's Ren Cancan, she was ill in hospital on an I.V. She had to settle for fifth.

Bujold wonders about the fairness of an Olympics that will see some top athletes unable to qualify.

"I understand that the organizing committee, and everybody, they're all trying to deal with this as it's happening, so it's not like I'm trying to put blame on anybody," Bujold said.

"But you're trying to create an Olympics, and the Olympics is supposed to be the best of the best athletes. And now we're in a situation, and we know it's not just us, I think there's what 35 sports that are still looking to qualify . . . you're not necessarily going to get the best people, you're going to get the people who kind of happen to fall within the new criteria."

Bujold hadn't been monitoring the COVID-19 cases in Argentina or at home, because "it just causes stress and worry."

"I'm just trying to stay focused on what I'm doing. Maintaining my little home and gym. And that's basically all I do," she said.

Both Argentina and Ontario are reeling in the pandemic's third wave. After recording more than 52,000 new cases combined on Tuesday and Wednesday, Argentina announced it was closing schools and implementing a curfew in an effort to flatten its steep spike.

"I feel like even the uncertainty of the Olympics, how are they even going to be able to put all this together? I don't know," Bujold said. "In my mind, I guess you got to keep fighting, you got to keep pushing. And while there's an Olympics to push for, I still know in the back of my mind that there's a chance that the Olympics still gets called off."

Bujold has spoken to a lawyer who believes she has a discrimination case based on her maternity absence.

She hopes Boxing Canada and the Canadian Olympic Committee go to bat for her, in perhaps persuading the IBC to rethink its ranking criteria.

Boxing Canada didn't respond to a request for comment.

It's been a rough year for Canadian boxers that goes beyond the absence of competition. In February, Bujold and 18 of her teammates were forced into isolation after national team training in Montreal was cut short due to a positive COVID-19 test.

This report by The Canadian Press was first published April 16, 2021.