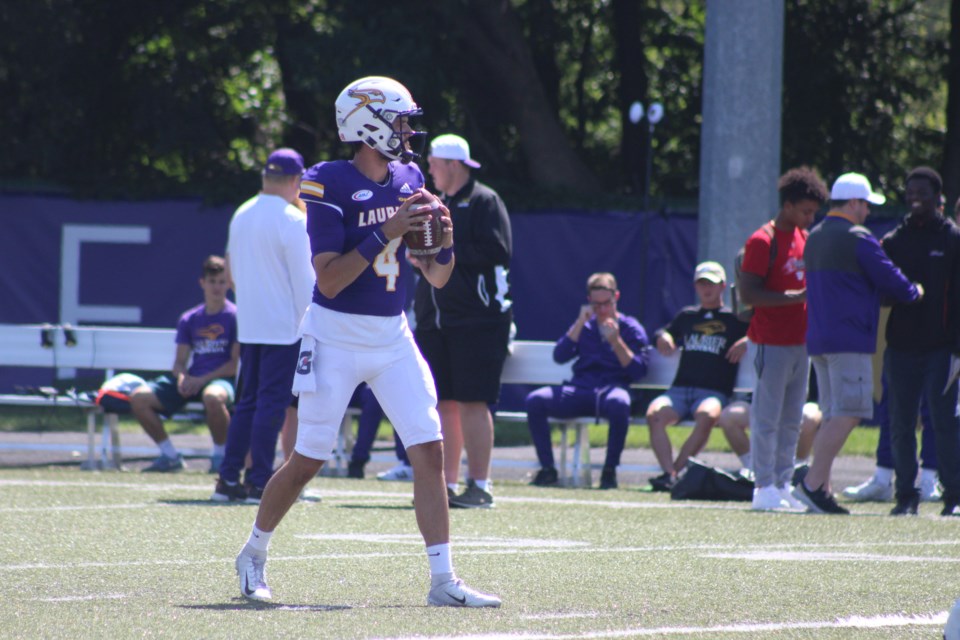 In what was one of the most anticipated clashes between University Avenue rivals in recent memory, the Battle of Waterloo did not disappoint.

Brentyn Hall took a short three-yard pass for the game-winning touchdown, as the Laurier Golden Hawks finished off a 53-50 triple overtime thriller over the Waterloo Warriors under the lights Thursday night at Warrior Field.

The Hawks jumped out to a 12-0 lead early in the second quarter, and went into the half with the 26-12 lead.

But 21 second half points, capped off by a Ford nine-yard touchdown run with 4:30 remaining in the fourth, tied the game at 33.

And to force overtime, Laurier was able to block a potential game-winning field goal from the home team with no time on the clock.

Both sides would exchange a pair of touchdowns to bring it to the third OT period, before Jonah Zlatinszky was forced to convert a 35-yard FG that opened the door for the Golden Hawks.

Three plays into their possession, Hall was in the end zone to end the marathon.

Connor Carusello went 14-for-24 with 208 yards in the air and three touchdowns.  Ford was 27-for-43, nabbing 351 passing yards (that's 486 all-purpose yards when you factor in his ground game), two TDs and a pick for the Warriors.

Hall's game-winner finished an impressive night for the veteran wide out, racking up 165 yards on eight catches with a pair of TDs.

Tyler Ternowski caught seven passes for 131 yards, including a 52-yard touchdown (the longest passing play of the night) in the second quarter.

After all that, both teams now move to 4-3 on the year, with Laurier undefeated in three games after their bye.  Waterloo has now lost two in a row.

The game had massive playoff implications too, with Ottawa (4-2), Waterloo and Laurier all sitting in the final three playoff spots, and Toronto and Carleton sitting close behind at 2-4 ahead of their matchups this weekend.

There's still plenty of football left this week, but there is bound to be a lot of scoreboard watching a week from now.

The Golden Hawks wrap up the regular season with their School Day Game, hosting Carleton at 11:00 a.m. on Friday, October 18 at University Stadium.

Waterloo will hit the road to Hamilton, facing McMaster on Saturday, October 19 at 1:00 p.m.