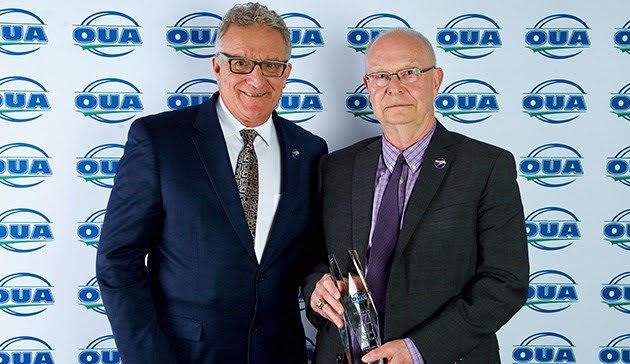 Ontario University Athletics (OUA) is pleased to announce the 2018-19 OUA Honour Award winners, recognizing the very best in the conference on the field of play, on the sidelines, and behind the scenes from this past season.

This year's award winners were honoured as part of the OUA's annual awards banquet, and there was no shortage of top-tier talent to celebrate at the Holiday Inn Kingston-Waterfront, once again demonstrating the preeminent play and championship calibre the conference has to offer.

From decorated coaches this season to one that capped off his career a year ago, this year’s John McManus Award, recognizing a retired OUA coach who exemplifies the highest ideals and qualities of sportsmanship and service while engaged in coaching in university sport, goes to Laurier’s Rick Osborne.

Since joining the Golden Hawks women’s hockey program as their head coach midway through the 2003-04 season, Osborne went on to enjoy one of Laurier’s finest coaching careers in any sport. He captured nine OUA championships and one national title during his tenure; a span that featured seven consecutive conference championships between 2004 and 2010. During his impressive stretch, he accumulated 412 wins across all regular season, playoff, and non-conference action, which ranks him fourth all-time on the U SPORTS career coaching wins list for women’s hockey.

Beyond the win column, Osborne also oversaw the recruitment and development of some of the best student-athletes to ever don the purple and gold, including five of the top seven scorers in program history. He also coached one of the top goaltenders to ever hit the university ice - Liz Knox - who is the only Laurier player to earn national Player of the Year recognition. In total, the Hawks saw a student-athlete earn provincial all-star recognition 42 times during Osborne's tenure, along with 11 All-Canadians. Off the ice, Osborne's impact was also evident, as he had 37 players named Academic All-Canadians over the course of his coaching career.

The accolades go on and on for the talented coach, but with a career regular season win percentage of .774, a career goal-differential of +685, and five OUA Coach of the Year honours, it is clear that Osborne set a lofty bar behind the bench during his time with the Laurier Golden Hawks women’s hockey team.

The complete list of 2018-19 OUA Honour Award winners is below:

- With files from the OUA