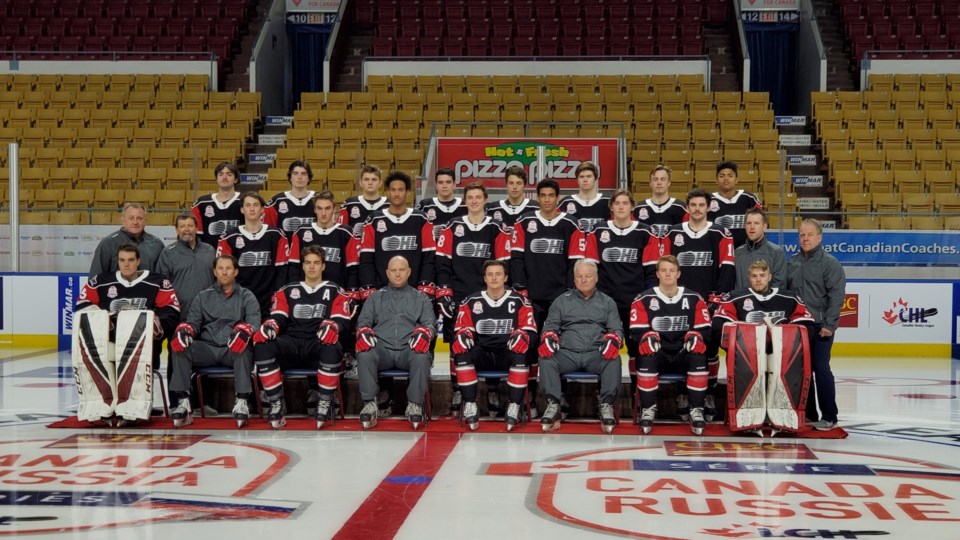 Team OHL that will play in Game 3 of the CIBC Canada Russia Series (Nov. 7, 2019). Mark Pare/KitchenerToday

The Kitchener Auditorium will be packed Thursday night for Game 3 of the CIBC Canada Russia Series.

Less than 50 tickets were still available as of Wednesday afternoon.

Kitchener Rangers forward Riley Damiani will suit up for Team OHL and Rangers head coach Jay McKee will be behind the bench.

"I'm working hard and playing hard this year ... maybe lift it up another notch, you know you're playing with top players in the league. We're playing against a highly skilled Russian team that plays very heavy as well," Damiani told 570 NEWS.

And due to injuries, Nico Daws and Cam Hillis of the Guelph Storm were added to the roster earlier this week.

Hockey Canada uses the series as a showcase to evaluate players ahead of the World Junior tournament.

Russia split the first two games with Team QMJHL, the score was 4-3 in both of those contests.

Sportsnet will also air the game.

Hitting the ice for morning skate in Kitchener 🏒