Blueshirts on brink of elimination after Game 3 loss

Despite a strong start by Kitchener, Guelph scored four times in the second period to take Game 3
Mar 26, 2019 9:48 PM By: Mark Pare 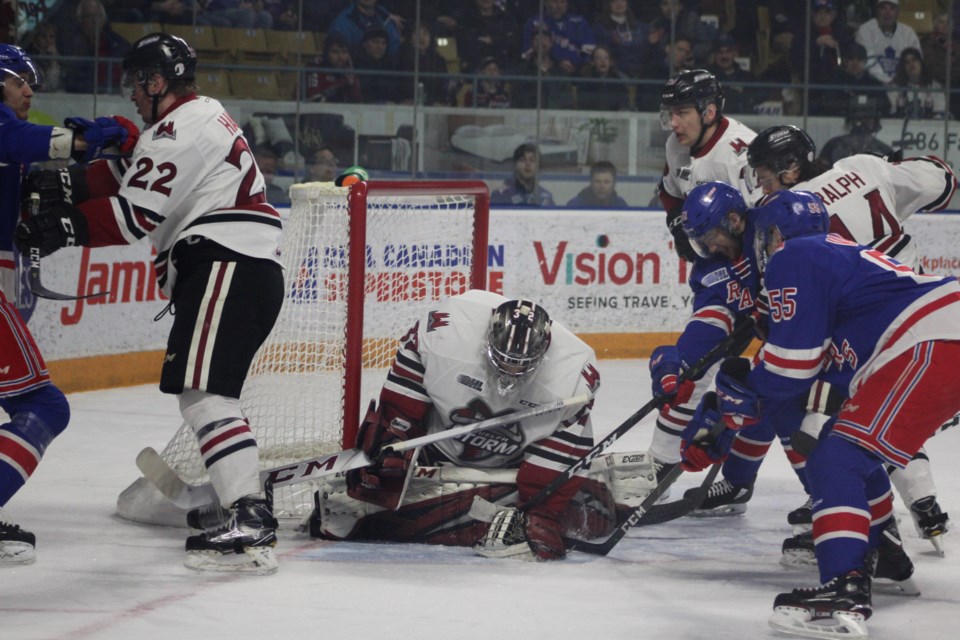 Despite a shift to the Kitchener Memorial Auditorium for Game 3, the result on the ice was the same as the first pair at the Sleeman Centre.

The Guelph Storm scored four times in the second period as part of a 6-3 win at The Aud Tuesday night, a night that saw a season-low 4,689 show up in the stands.

Rangers head coach Jay McKee says the effort was there from his team.

"They're obviously beating us up right now in the special teams.  Our (penalty kill) has to be a little bit better, our power play has to find a way so we have to tweak some things there."

Despite having the OHL's top power play during the regular season, the well has gone dry for Kitchener.

They went 0-for-5 on this night and have yet to score on nine opportunities with the extra man this series.  By comparison, Guelph has four goals on 10 chances.

McKee adds while the team worked hard, the execution on the back end was lacking in the middle frame and gave credit to Guelph's attack.

The sparse crowd did get to witness a better start for the home team, who put 18 shots on Guelph goaltender Anthony Popovich after just registering eight in the opening period in the first two games combined.

Nick Suzuki opened the scoring on Guelph's lone power play marker of the game about halfway through the period, but Joe Garreffa tied it up 45 seconds later.

The second started off more promising, with Jonathan Yantsis --- shortly after exiting the penalty box --- giving the Rangers their first lead of the postseason 37 seconds in.

Ironically, that lead would last all but 37 seconds.

Waterloo native Nate Schnarr tied the game up and continued his hot start to the series.

That was the first of four goals in the second period for the visitors, who turned up the pressure and looked more like themselves, outshooting the home side 21-8 in the process.

Isaac Ratcliffe, Alexey Toropchenko and Suzuki provided the other markers, while Yantsis added another to make it a two-goal game through 40 minutes.

The Toropchenko marker was questionable, with many believing there was a missed offside call.  It was not reviewed.

But nonetheless, Kitchener pressed in the third to climb back but just couldn't tickle the twine.

Dmitri Samorukov iced it on an empty netter with 40 seconds to go.

Both Suzuki and Schnarr led the way with three point nights, as the offense was spread around once again on this deep Storm squad.

And now to keep their season alive, the Rangers have to do something they’ve only done a couple times all year: string together four wins in a row.

McKee says their backs are against the wall, and all they can do now is leave everything they have on the ice.

"We have 20 guys, 18 skaters that go out there and a goalie that makes some saves like (Luke Richardson) did tonight," he said, "If they leave everything on the ice, and you go back in the room after, look yourself in the mirror and know you gave everything, that's all we can ask."

The #OHLRangers are unable to connect on three 3rd period power plays and Dmitri Samorukov ices the game into an empty net. 6-3 Storm as Guelph takes a 3-0 stranglehold in the series. Shots 44-40 GUE. #OHL #OHLPlayoffs