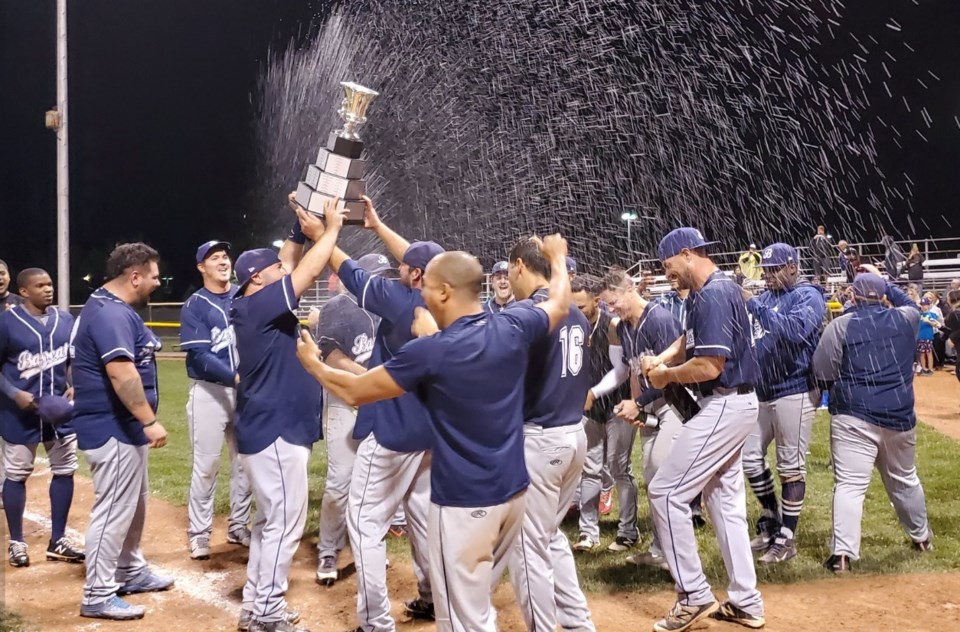 Another chapter of a storied IBL rivalry has been written.

But for the Kitchener Panthers, the 2019 season ended the same way it did the previous two seasons, watching the Barrie Baycats celebrate.

The Baycats showcased their bats in a big way, routing the Panthers 15-0 to win their sixth straight Intercounty Baseball League Championship in Game 6 Saturday night in Kitchener.

And speaking with both Managers after the game, you can tell that with these two teams have a ton of mutual respect for one another.

“Barrie’s a good team. They hit the ball well tonight, and obviously scoring 15 runs, they proved it just by doing what they do,” says Panthers skip Luke Baker, “Hitting a lot of solid base hits, taking good approaches and it was a tough one, a real tough one to lose.”

“Obviously, we don’t want to lose, period (but) it would’ve been just as hard, if not, harder if we lost a game that was by one run.”

“That (score)’s not a reflection of Kitchener,” added Baycats bench boss Angus Roy, “Kitchener’s an incredible organization. That’s an incredible baseball team, we know how good they are. They showed it coming back to make it 3-2 and everything along the lines of that.”

“It was just a perfect night, and a perfect storm for us tonight.”

It all started with the very first pitch of the game, which Baycats outfielder Ryan Spataro took over the fence to give his team the lead.

That was just one of two home runs on the night for the eventual IBL playoff MVP, who finished four-for-six on the night and went .519 at the plate throughout the postseason.

He’s held in high regard by both skips. Roy referred to him as the Baycats “leader, and one of the best players in history of the league.” And Baker says he’s the playoff MVP “for all the right reasons,” pointing also to his defense.

“He’s always been like that,” Baker said, “He’s been a hell of a ball player since I first saw him when he started coming up.”

The game remained close for the most part, but Barrie would score another four runs in the fifth inning, spelling the end for Panthers starter Yoen Soccaras. He got the hook following Ryan Rijo’s two-run single to make it a 5-0 game.

Soccaras gave up seven hits and five runs --- three of them earned --- while walking four and striking out four.

His counterpart, Adrian Salcedo, was in cruise control all night long. He got in a full eight innings of three-hit baseball, striking out five and walking three.

Baker was ejected after an argument, so he wasn’t in the playing area when disaster struck, in the form of a nine-run sixth inning for the visitors to balloon the lead into double figures.

Fans started filing out after the inning came to a close and the 50/50 ticket winner was announced.  And by the time the ninth rolled around, what was once a packed Jack Couch Park turned into attendance figures akin to a regular season game.

Another run would score in the eighth, but the Baycats didn’t exactly need it as the Jack and Lynne Dominico Trophy was already being prepped for presentation.

“This is all too familiar,” Baker says, “Seen this so many times in the last number of years. It’s where we wanted to be, and obviously it’s going to be what we shoot for next year and I tip my cap to them. They’re a hell of a group, and hell of a bunch of guys too."

"Competitors, they’ll fight tooth and nail to the end, and unfortunately for us this year wasn’t our year.”

A quiet ending to a series and a season that had signs of going the distance.

After going down by three games, the Panthers came back with a pair of wins to put themselves into a Game 6 situation at home, the very same scenario as 2018.

Baker showed appreciation for the fight and the push his team showed, and had nothing but praise for what he saw from his side in 2019.

“We had a very good season,” he said, “We had everybody contributing at some point or another throughout the year, so it was fantastic to have such a good group of guys contributing and playing and coming together.”

Now, Baker and the team looks to 2020, and will see what they have to work with to tackle the giant once again, if the Baycats still have their core in tact.

As for the historical significance, Roy says the Baycats can’t do what they did without everyone contributing, from ownership to the players and volunteers.

“As of right now, until something changes, any time you mention the IBL, you’re going to have to mention our organization and what we just did on this run,” he said, “And I think that’s good, and it’s just a reflection of all the hard work.”

The IBL has now had two champions in the last 12 seasons. The Brantford Red Sox’s streak went from 2008 to 2013, and it’s been all Barrie ever since.

Kitchener’s no slouch, making the IBL Finals in four of the last five years.

But alas, another offseason for the Panthers with a lasting image of Barrie celebrating a championship at Jack Couch.