The back-and-forth affair saw ejections, pushing and shoving, arguments and a blatant bat flip
Sep 7, 2018 12:46 AM By: Mark Pare 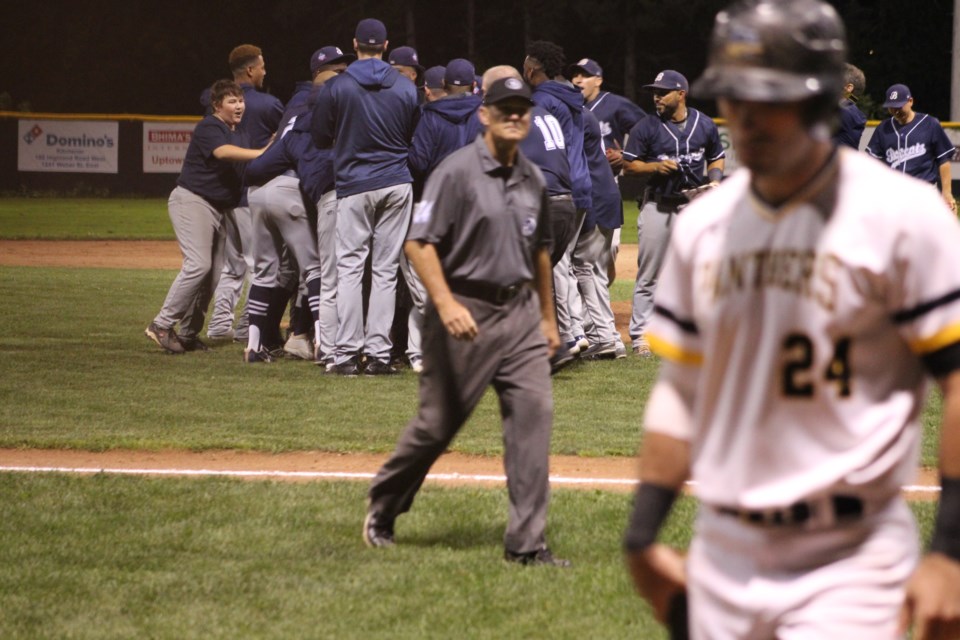 Kitchener Panthers' Tanner Nivins walks away, as the Barrie Baycats celebrate a championship win in the background. (Mark Pare/KitchenerToday)

Stop me if you heard this one before.

A playoff baseball game on Canadian soil got quite heated after a bat flip, following what turned out to be a series-clinching home run.

Unfortunately for Kitchener Panthers fans, it wasn't the home team on the winning side of this one as the Barrie Baycats claimed their fifth straight Intercounty Baseball League Championship with a 6-3 win at Jack Couch Park Thursday night.

"We got off to that early start and Barrie answered back and they're a team that's not going to give up," said Panthers Manager Luke Baker.

"We battled back and forth, which is kind of the way our series has been going and I love it.  I love that kind of series.  It was good baseball, it was fun, exciting for us, the fans and it kept that way until things started opening up for them."

Game 6 started out good for the home side, as Keegan Marsden knocked in an RBI single in the first.

But Kyle DeGrace ripped the lead away in the second inning with a two-run home run for the Baycats.

It would stay that way until the bottom of the fifth, with Kitchener loading the bases with nobody out.

Mike Gordner hit a ball right to the second baseman, who attempted to tag the runner headed for second and pitch to first to complete the double play.

However, the umpire ruled the tag wasn't applied and instead of the inning ending play, Colin Gordner crossed the plate to tie the game.

The next batter --- Brian Burton --- beat out a throw to first and Tanner Nivins was able to score and the Panthers were rolling with the 3-2 lead.

But then the heat of this rivalry boiled over in the seventh inning.

With one out, Glenn Jackson hit a no doubter over the fence in right field to tie it up, showing lots of excitement and feeding off the bus load of fans that made the trip from Barrie.

The next batter reached on a walk.  And then Starlin Rodriguez hit a two-run home run to give Barrie the lead.

But it was the events that followed that irked the Kitchener side, as Rodriguez proceeded to flip his bat sky high --- about 15-30 feet from Baker's estimation, and hitting the fence behind home plate --- in a fashion the Panthers "weren't too thrilled about."

"Tough to tell what exactly was going on, but I know the basics and didn't necessarily agree or like what was going on," Baker said, "It got pretty heated, pretty quick."

He had a lengthy discussion with the umpires afterwards, as the more than 1,900 fans in attendance continued to witness and react to what they were seeing on the field.

He says the discussion centred around how Panthers catcher Mike Gordner wanted to talk to Rodriguez about the bat toss.

"(Gordner) was standing near the line, but he wasn't blocking him.  He said his words and the guy gave him a shove, so right away, should be an instant toss and that's what I was talking to them about.  He did nothing wrong," Baker explained.

"They said he got in his face, in his way, and I said 'No he didn't, cause he didn't.'  He literally said a couple words and he just shoved him and then from there, there was a lot of things that were done that I didn't exactly agree with, but again, that's not my call, not my choice and...I'm not going to say too much on that."

Rodriguez was ejected from the game.

Mike Schnurr, who gave up the two home runs, threw his next one inside and in the dirt and was automatically ejected from the game.

Baker would come out to argue his side, and was ejected from the game as well.

DeGrace would add another run to the Baycats' total before the inning was over, to round out the scoring.

Jackson would end up winning the IBL Playoff MVP Award, hitting a .432, and led the league in hits (19) and doubles (7).

Schnurr took the loss for Kitchener, while Santos Arias got the win for Barrie.

He went eight innings, surrendering eight hits, three runs --- one of them earned --- while walking one and striking out six.

Despite the not-so-great finish to their year, Baker says Kitchener had a great season overall.

"We were first place almost all the way through, we did really well.  There were so many positives to take from this season," he said, praising among other things, the pitching staff and defense.

"The guys came together and played for each other, which was really nice to see.  All season long, that's the one thing that they wanted in the offseason, the core group of guys and that was something that we accomplished, so that was a huge goal that we accomplished.  The other was to win the championship, which obviously we didn't accomplish, but we were right here.  We got right here, we did everything we could and you can't fault guys for that.  Very proud of the way they played and very happy with how things went."

"It would've been great to win it, but it's baseball, it's sports," he said, "You win some days, you lose some."

Baker predicts the 2019 edition of the Panthers will be a strong group, and also hungry.