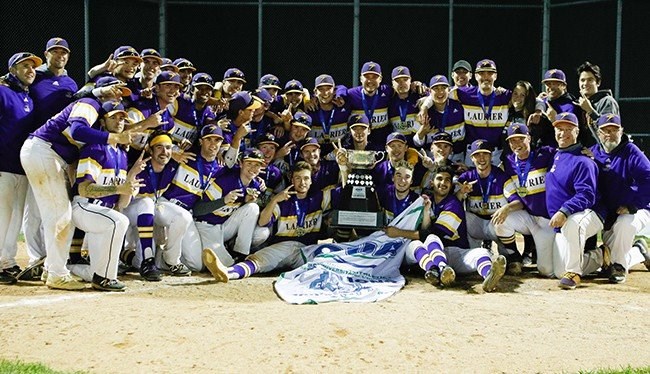 NEWS RELEASE
LAURIER ATHLETICS
*************************
For the second time in as many years, the Wilfrid Laurier Golden Hawks men’s baseball team captured the OUA Championship after they defeated the Carleton Ravens 12-1 in seven innings on Sunday night at the Ajax Sportsplex.

Led by a dominant pitching performance from starter Ryan Douglas of Georgetown, Ont., and a five RBI game from leadoff hitter Chad Meyer of Kitchener, Ont., the purple and gold capped an undefeated weekend in style to bring home the program’s third provincial title in the last seven seasons.

“They’re all a little bit different for sure,” said head coach Scott Ballantyne after the victory. “We graduated a lot of players last year that were key parts of our team that we knew were going to be very hard to replace. People thought we would take a step backwards because of those departures but internally, we knew that we had the people to fill the roles. It really speaks to the strength of our program from one year to the next that we’ve been able to remain competitive over a long period of time.”

Reaching the championship final wasn’t easy for the Hawks as they began the day facing the McMaster Marauders in the OUA Semifinal. Trailing 6-2 heading to the seventh inning, the Hawks made a furious comeback and tied the game at seven as the game moved into the ninth inning.

After Nick Murray of Barrie, Ont., pitched a scoreless top half, Laurier got two runners on with two outs in the bottom of the inning, bringing centerfielder Ryley Davenport of Oshawa, Ont., to the plate. The fifth-year veteran came through in a big way, hitting a three-run home run to send the Hawks’ bench pouring onto the field to greet the hero at home plate.

“Ryley’s from Oshawa so it’s like playing in his backyard and he really stepped up for us this weekend,” said Ballantyne. “We were trailing most of the game but we never felt like we were out of it. I don’t think anyone in the dugout felt like we were out of it. We knew that Mac had played a lot of baseball and that they were going to have to keep going to their bullpen. We had enough fire power that we knew we could capitalize if they had any mistakes and that’s what we were able to do. I’m so happy for him to do that in his final year and it’s a moment that will go down as one of the signature moments in our history.”

Riding the momentum from that home run, the Hawks were relentless offensively in the championship game, and it all started with Davenport once again. He connected for a solo shot in the bottom of the first inning, his third home run of the day, to get the ball rolling and Meyer followed that up with a three-run home run in the second inning. From there, Laurier never looked back, scoring in every inning they came to bat while pounding out 12 hits.

Douglas was outstanding on the mound, picking up the win while allowing just one earned run in five innings of work and striking out nine. Fifth-year senior Christian Hauck of Orangeville, Ont., came in to pitch the final two innings, striking out five of the seven hitters he faced without allowing a hit.

In total the Golden Hawks put up 19 hits and 22 runs in their two Sunday games to bring home the 75th provincial title in the history of Laurier varsity sports.