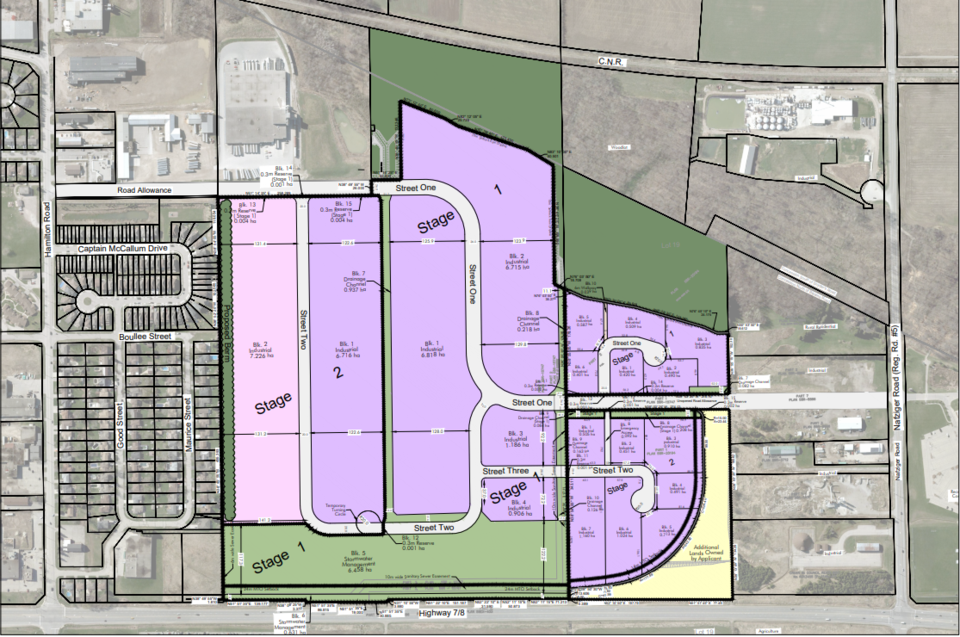 A mock-up of the Wilmot Employment LandsTownship of Wilmot

Wilmot Council has formally recommended the approval of two industrial plans of subdivision to Regional Council, citing their importance to the future economic health of not just Wilmot Township, but also the greater Region of Waterloo. Those lands, referred to as the Wilmot Employment Lands, are located along Highway 7/8 between New Hamburg and Baden, providing 94 acres of industrial and light industrial zoned lands.

Speaking to the project was Harold O’Krafka, Wilmot’s Director of Development Services, who said it’s his hope and expectation that the developments will make Wilmot a “preferred choice in Waterloo Region for prestige employment land uses in the coming years”. O’Krafka said the lands are located strategically along the highway, with controlled access at various points along with a potential for rail access through the north.

While O’Krafka said specifics on the number of potential jobs to come from the planning lands are dependent on the nature of use that locates there, he said that the official plans target a minimum density of 40 jobs per hectare – meaning a minimum of 1500 jobs “at full buildout” for the Wilmot Employment Lands.

The considerations for the Wilmot Employment Lands also include an opportunity for expansions to Wilmot’s recreation and active transportation networks, as O’Krafka said plans include multi-use boulevard trails as well as off-road trails through forests that have been donated through the developer to the township.

“We’ve integrated our trails master plan – it integrates these lands with our overall plan of creating recreational trail links, but also an active transportation network.” said O’Krafka. “The multi-use trail along the primary road linking New Hamburg to Baden, but also the developers have donated a significant amount of land – well beyond the planning act requirements.

O’Krafka said the Planning Act requires around two per cent of land proposed for commercial or industrial development to be dedicated for parkland purposes. O’Krafka said the Baden view development has donated over 10 per cent, while the New Hamburg owners donated about 34 per cent of the land to the municipality. That land, said O’Krafka, will be used for expanding the trails network between Baden and New Hamburg to the Wilmot Recreation Complex.

“We’re really excited about that potential, as it speaks to the plans of the township to take significant natural features and put them into public ownership so they can be enjoyed and protected.” said O”Krafka. “The developers understand the value of that kind of recreational opportunity tied into an employment area; people can go for a walk on their lunch break, go over to the Wilmot Recreation Complex, for example.”

O’Krafka added that the development of these employment lands also includes significant infrastructure investment in roads, trails, sewers, storm water treatment and the drinking water system. Those investments include physical road connections for residents of New Hamburg along with active transportation links from New Hamburg to the Wilmot Recreation Complex that will allow, in theory, families to bike out to the complex.

According to O’Krafka, plans for the Wilmot Employment Lands are already before the Region, as he expects sign off on the draft approval could come from the region in weeks, if not possibly days. Following approval, O’Krafka said steps forward would include detailed engineering drawings submitted by the developers, township and region, to be reviewed with agreements to be drafted shortly thereafter.

“We’re hoping that we’ll see earth being moved by the fall.”

O’Krafka said money has been available from the federal and provincial government for the project toward components of the infrastructure, through the Ontario Commuter Cycling Fund and the Clean Water & Wastewater Fund.