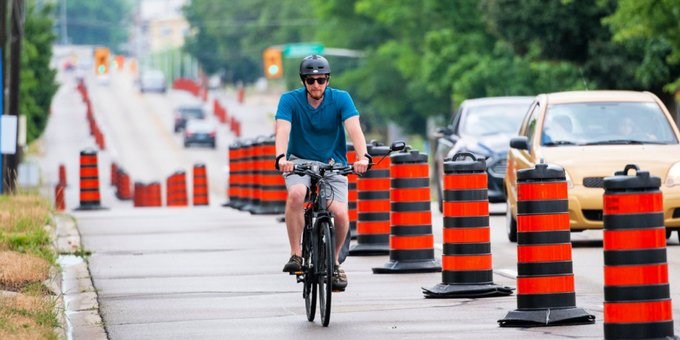 Photo courtesy of the Region of Waterloo on Twitter (@RegionWaterloo)

Over the past weekend, community activist Melissa Bowman has been tweeting her support for the region’s temporary COVID-19 bike lane project. The project, created by regional council after overwhelming response to public consultation, created thirty kilometres of new temporary bike lanes on regional roads, and will likely be in place until October 31st.

In her original tweet, Bowman said that she had noted some benefits of the new lanes both as a cyclist and a driver, and that she was beginning to also enjoy them as a pedestrian – as they provide those on the sidewalk with an extra buffer from road traffic.

The next day, Ward-3 Councillor John Gazzola responded to Bowman’s public message, stating simply “You are losing this one. The silent majority is starting to speak up”.

You are losing this one. The silent majority is starting to speak up. https://t.co/rhosdcPeGO

The message drew criticism from several community members, who called the message belittling, offensive and shameful – with some even calling on the Councillor to retire. One of the responses to the public twitter thread came from another regional councillor: Tom Galloway.

In his response, Galloway said “… it is not okay for an elected official to criticize a community advocate who tirelessly works on behalf of her neighbourhood/community just because you hold an opposing view”

Speaking with 570 NEWS, Bowman said that she wasn’t offended by Councillor Gazzola’s response, though she did find it to be surprising.

“It seemed like a fairly benign and overall positive tweet about a regional project (…) to say that I’m losing in that context felt odd; I’m not really sure what I’m losing at. I was more surprised, and a bit confused about what the point of the retweet with his comments was”

When asked if she had any inclination as to where this engagement would have come from, Bowman mentioned that she is active on council issues as a community builder. Speaking with council on several issues, she says she knows the councillor well, and that the two of them have different perspectives on how to build a great city.

“… and I think that’s fair – of course we’re going to come across people who have different visions on the best ways to move the city forward (…) I wasn’t quite sure why this is the tweet he chose to engage with, and the manner that he chose.”

Responding to the criticism he received over twitter, Councillor Gazzola called the “cycling lobby” a very knowledgeable and well-informed group, though he took issue with the language being used in the comments he’d received. In speaking with Bowman, she said it’s frustrating to be lumped into a group.

The Ward-3 Councillor went on to tweet about his personal experiences as a cyclist in the region, saying that he has been cycling in the Westmount road area for the last 18-20 years. He says that, while the street is typically busy, there are miles of underutilized sidewalk on each side – which he continues to use instead.

In an effort to more fully explain my thoughts on cycling let me share my experiences. I have been cycling on Westmount Rd for the last 18-20 years. It is a very busy street with miles & miles of sidewalks on each side of it. I continue to ride on the sidewalk. No harm to pedest.

“Clearly we’re not supposed to be riding on the sidewalk…” said Bowman. “…all of his comments to me seemed like great arguments for why we do need these lanes.”

Councillor Gazzola says in his series of tweets that there’s no need to waste five-hundred and fifty thousand dollars on the COVID bike lanes, when that money could be better spent on improving and connecting existing cycling infrastructure that already exists. Bowman, however, disagrees.

“These COVID lanes were meant to give some additional space” says Bowman. “Main trails such as Iron Horse trail or Spur Line are very busy right now – that does not work for commuting cyclists; it just gives people space”.

Bowman also says that these COVID bike lanes are great for gathering data on cyclists, while giving residents of the region a space to get out on their bicycles while they try to navigate the pandemic.

570 NEWS has reached out to Councillor John Gazzola for comment on the exchange.