Associate Professor Donna Strickland is the first Canadian woman to ever win the Nobel Prize in physics
0
Oct 2, 2018 5:13 PM By: Mark Pare 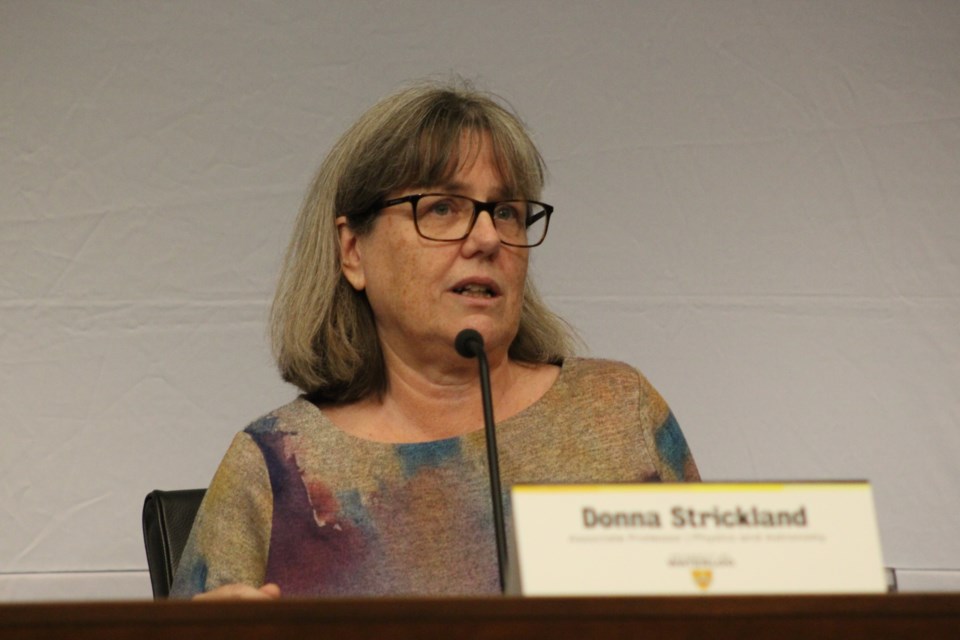 Canadian history has been made at the University of Waterloo.

Donna Strickland, an Associate Professor, was honoured with the Nobel Prize in physics Tuesday morning.

She becomes the third woman in history to do so, the first in 55 years and is the first woman in Canadian history.

The last woman to win was German-born American Maria Goeppert Mayer in 1963, and you have to go back to 1903 when Polish and naturalized French physicist Marie Curie became the first woman in history to claim the physics prize.

Strickland also joins a Canadian contingent to win the Nobel Prize that includes names such as former Prime Minister Lester B. Pearson and Frederick Banting.

She held a press conference at UW Tuesday afternoon in front of a packed room with students, officials and media.

(CLICK HERE to see the full event at UW.)

"I'm overwhelmed, really," she said about the honour, "I will tell you that over the years --- cause this is for work done a long time ago --- somebody from the Nobel Prize (commented that) they think it's the first time ever that someone got it for their very first paper."

"Over the years, when I've met people, they have said 'Haven't you got that Nobel Prize yet?' but I always thought they were kidding with me."

She'll share half of the $1-million dollar prize with Gerard Mourou of France for their work in laser physics, playing a key role in the discovery of Chirped Pulse Amplification (CPA) -- a technique that underpins today's lasers, including those used for eye surgery.

The other $500,000 goes to Arthur Ashkin of the United States for developing "optical tweezers."

"When we were doing it, we just knew that what we were trying to do was get the electric shield beyond the electric field that holds the electron to the atom," Strickland said, "(If) somebody else could turn it around and get a good use out of it, that's great."

She says back then, you could either have short pulse lasers or high energy ones, not both because you could blow up the laser of you put the peak power on it.

"After we published it, and after people came to the lab, they said, 'Well, you know the radar people did this back in World War 2,'" Strickland explained, "We always keep reinventing the wheel."

She says a Nobel Prize was never in her plans.

"Obviously very few people win the Nobel Prize, so why would you want to waste too much time thinking about that," she said.

"I'm thrilled to win it, I'm not saying that it isn't an absolute thrill to win it but certainly, it never entered my mind that I would."

Strickland says she recognizes that her new status as a Nobel winner may boost her status as a role model for young women wishing to pursue a career in science, and she urges them to follow their dreams.