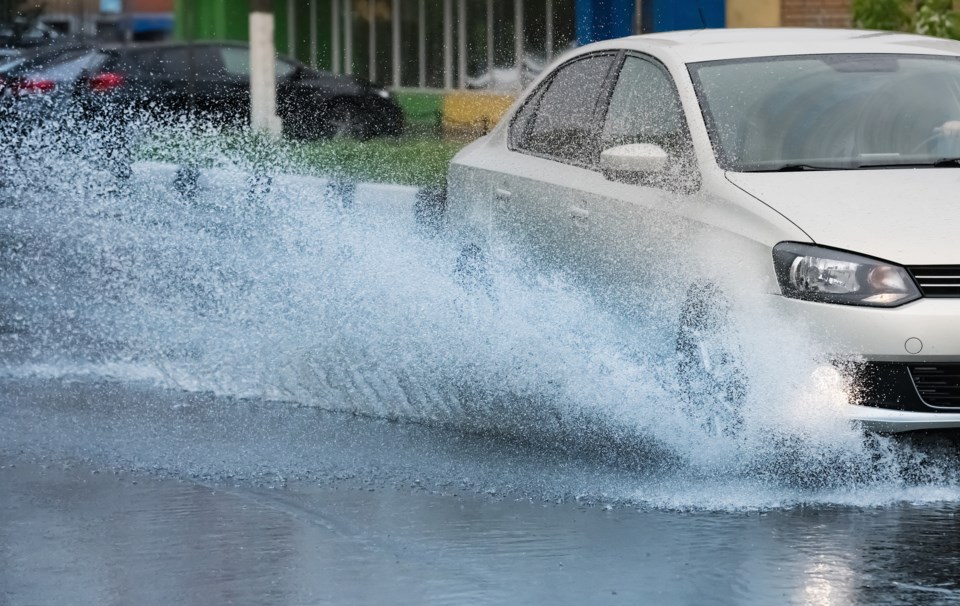 With plenty of rain in the forecast for the upcoming week and an estimated 40 to 60 millimetres of rain falling on the region on Saturday, the Grand River Conservation Authority issued a Watershed Conditions Statement this weekend – warning of elevated safety risks around waterways throughout the watershed, higher than normal river flows and an increased risk of flooding in low-lying areas.

Dr. Blair Feltmate is the Head of the Intact Centre on Climate Adaptation at the University of Waterloo, and calls residential basement flooding the “number one cost” due to climate change in Canada “by far”, while also being one of the most easily solved challenges.

While nobody really wants to experience a sudden appearance of two to three feet of sewer water in their basement, Feltmate emphasized that a flooded basement is also not cheap – as he noted that the average cost for getting that space back into running order in Canada is roughly $43,000. On top of that significant cost, Feltmate also emphasized that a basement flood carries significant psychological stress, as those who store valuable, sentimental items in their basement may find those irreplaceable mementos damaged as well.

“The most bang for your buck we can get in Canada to address climate change and extreme weather risk is helping homeowners protect themselves from basement flooding – period.”

Speaking to some of the tips suggested by the Intact Centre, Feltmate said there’s a “tremendous” number of actions that homeowners can engage in around their homes with very little financial implication or requirement of expertise to quickly lower the likelihood of a flooded basement – including removing debris from sewer grates, clearing eaves troughs of debris and, if you have one, testing your sump pump to make sure it’s still in working order.

“That’s simple to do – you literally just take a bucket of water, pour it in the pump and see, does the pump turn on and pump water outside? If it does, you’re in good shape. If it doesn’t, then you want to look into whether it’s seized or if there’s some other problem associated with it,” said Feltmate. “For many people, the first time they find out their sump pump isn’t working is when they have two or three feet of water in their basement.”

According to the GRCA, significant flooding is not expected through this week’s weather system, as the organization notes that its major reservoirs captured most of the runoff due to lower than normal operating levels from our recent dry weather conditions. Feltmate notes that those dry conditions are both advantageous and somewhat concerning.

“It’s advantageous in the sense that reservoirs have capacity to take water during high discharges (…) or in areas where there are dry ponds in communities, they’re open and water can flow into the dry ponds and be stored there safely,” said Feltmate. “However, when you’ve had extended periods of dry, hot weather the permeability of the ground tends to not be very much so. When the rain hits, it flows off quickly over ground to the lowest point around (…) which can often be somebody’s basement.”

Calling the wet weather a firm example of climate change, Feltmate noted that extreme precipitation events are becoming more frequent, and more intense. Looking to the western end of the Great Lakes, Feltmate said the intensity of the top one per cent of precipitation events over the past 55 to 60 years has increased by 37 per cent. On the eastern end of the Great lakes, intensity of those events has increased much more significantly – up by 71 per cent.

“Over the last 100 years in Southern Ontario (…) we’ve lost about 72 to 73 per cent of the natural infrastructure that was originally here – the forests, fields and wetlands. They gave water a place to go when big storms hit.” said Feltmate. “We’ve either paved them over or turned them into agricultural areas. In either case, when water hits pavement or agricultural areas, it tends to run off quickly to the lowest location – which can be someone’s basement.”

Sharing further preparedness tips, Feltmate said homeowners should be in communication with their insurance provider or broker to determine what their coverage looks like should they wind up with a flooded basement. According to Feltmate, where the water flows in from can denote a different form of flooding, which may mean a different form of coverage.

“If water backs up through the sewer system, up through the little drain in your basement (…) that’s one form of flooding,” said Feltmate. “If water flows through the side window of your house into your basement, that’s called overland flooding – that’s a different type of insurance coverage. A lot of people, quite frankly… they’re not sure until their basement is flooded.”

Feltmate also cautioned that homeowners need to consider preparedness, even if they’ve lived in an area for 20 or more years with no flooding.

“With climate change, one of the things people need to understand is the weather of the past is not a good predictor of the weather of the future,” said Feltmate. “All the things we’re talking about in preparedness… they should be put into place independent of whether or not you’ve ever experienced flooding at your house.”