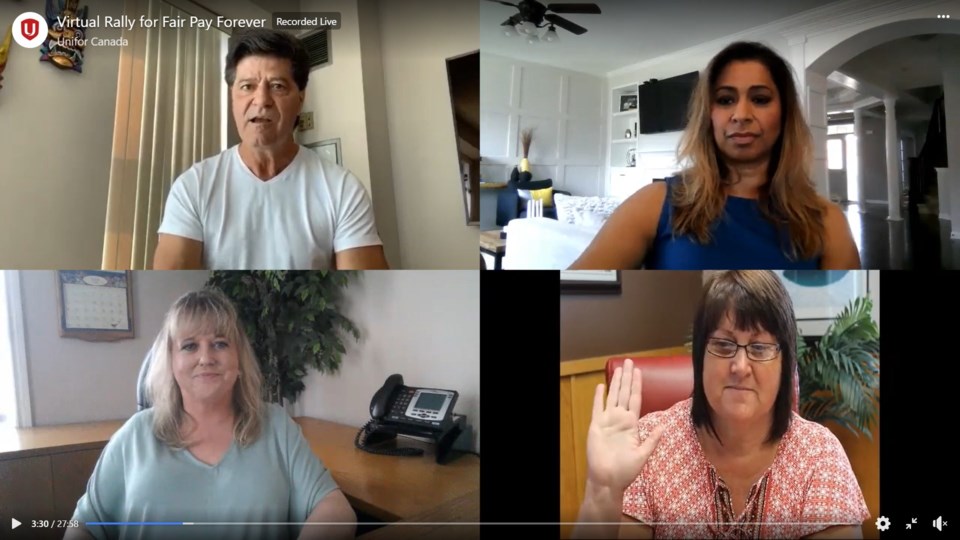 A screenshot of the virtual rally that took place on Friday. Unifor Canada/Facebook

At the rally, Unifor President Jerry Dias told attendees he is glad to see that speaking out has helped the union make a difference.

"So when there was a media backlash from our union speaking on behalf of all the workers, what did Loblaw do? In order to deal with the negative reaction, CEO Sarah Davis penned a letter to all employees saying 'that's misunderstood,' that 'others in the media have really made a big deal out of nothing'."

Dias says he has a message for Sarah Davis, the CEO of Loblaw:

Dias let rally attendees know that the Minister of Labour, Monte McNaughton, and Premier Doug Ford have told him they've rejected the proposal that would have reduced the number of holidays for retail workers.

"The nine days of staff holidays will be remaining for our members in the retail sector. So that's a huge victory for our members, for our retail workers, and it shows that our union, when we push, can make a difference."

More than 200 people from across Canada joined the virtual rally on Facebook.

WLU creating new podcast network for Canadian researchers
Jul 12, 2020 10:30 AM
Comments
We welcome your feedback and encourage you to share your thoughts. We ask that you be respectful of others and their points of view, refrain from personal attacks and stay on topic. To learn about our commenting policies and how we moderate, please read our Community Guidelines.