The traffic system consists of a mobile app and a window sign that tells customers when they can safely come in
May 8, 2021 6:00 PM By: Taylor Pace 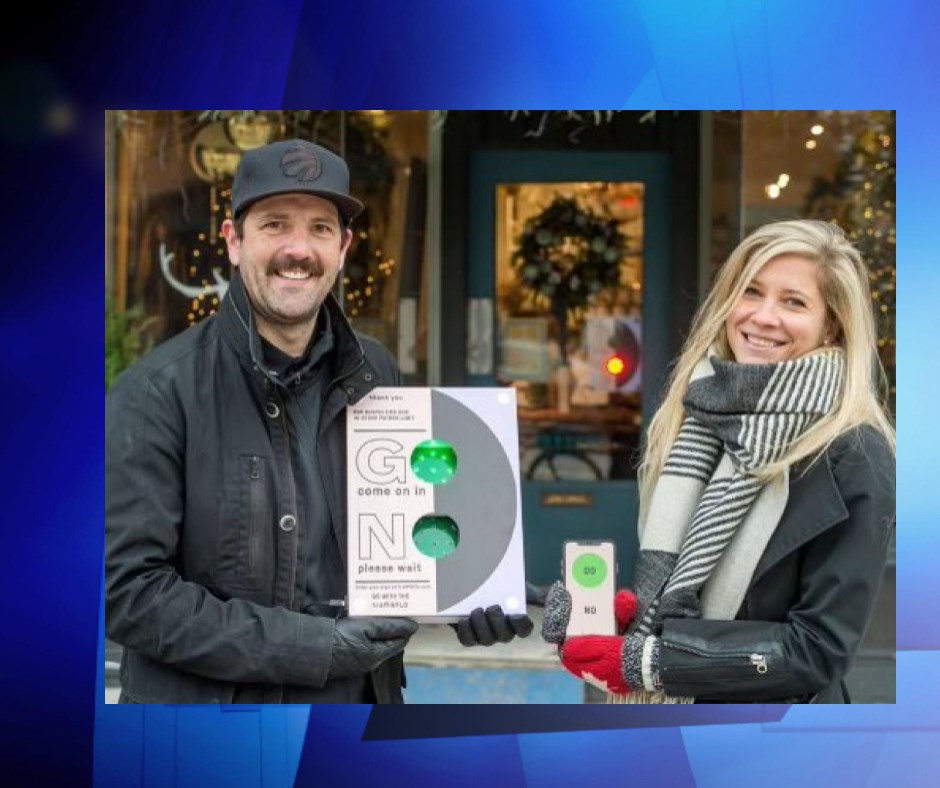 Damian and Tara Wright, creators of TraffikFloCourtesy of Damian Wright

Like so many others, Damian and Tara Wright began walking around their neighbourhood more often after the pandemic hit.

These walks once consisted of visiting stores, and “picking up little treats and trinkets along the way.” But with limited capacities, this was becoming more and more difficult to do, especially if a glare was on the window, making it difficult to count how many people are already inside.

It was on one of these walks that the pair wanted to stop for coffee. Pressing his face to the window to try to see past the glare, Wright thought he saw only two people inside, meaning they were ok to go in.

“When my wife, Tara, went to go inside, they kind of shouted at her,” Wright said. There had been a third person he didn’t see.

The system consists of a traffic light sign that tells customers when they can come in, and is controlled by an app you can download on your phone or Chrome web browser.

The green or red light can be changed manually, but it also features a “counter mode,” which allows the user to select a maximum number of patrons in the store. As patrons enter, you add to the tally until the number is reached, which will turn the display from green to red. As people leave, subtract from the total and the light will turn back to green.

“What we really wanted to do was make it fully automatic to count people coming in and out, but unfortunately, I don't think a lot of smaller stores would be able to afford a bigger unit like that,” said Wright, who is also the founder of WXM Tech, a Toronto-based tech company for events.

By keeping it manual, it remains an affordable option for smaller retailers at $99.

“I think the price is really great for a small store just to have it up and running and allow them to control their traffic for the next three months at least,” he said.

Although users are still required to manually count patrons as they come and go, Wright maintains that it is a safer and more straightforward option for retailers to adopt.

“It's an extra step that I'm sure that nobody wants to have to do, but it makes life easier for them not having to employ people to manage the line up [and] allows them to control things from safely behind the counter,” he said.

So while users need to count customers, they don’t need to physically stand at the door - eliminating unnecessary close contact.

It also solves the problem of being unable to tell how many people are inside, and if or when you’re supposed to go in.

“The customers are the ones who really love it just because they know that the store is open, and they know [when] it's safe to go inside.”

Wright notes that one of the biggest challenges they’ve faced has been getting word out about the product.

“We don’t have the funds to reach all these retailers, so we’ve just relied on word of mouth,” he said.

However, he added that they have still managed to reach a diverse audience, selling several hundred units across Canada and as far as Bermuda.