The court application says she has since been transferred to Grand Valley Institution for Women in Kitchener
0
May 15, 2019 11:30 AM By: Canadian Press 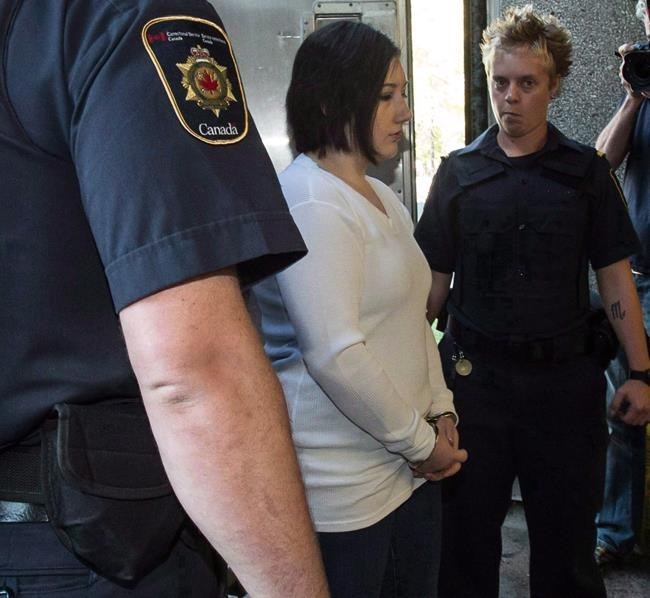 A woman serving a life sentence for the murder of eight-year-old Tori Stafford says her move from a healing lodge back to a prison was unfair.

Lawyers for Terri-Lynn McClintic filed an application in Edmonton court April 30 asking that the move be declared unlawful.

"Ms. McClintic experienced a loss of residual liberty as a consequence of being transferred," said the application.

"The decisions which led to that loss ... were unreasonable and procedurally unfair, and therefore unlawful."

The application names the Correctional Service of Canada, prison wardens and the federal justice and public safety departments.

A judge ruled Monday that a review is warranted but additional papers need to be filed before it can proceed.

Victoria Stafford was kidnapped while walking home from school in Woodstock, Ont. in 2009, then raped and murdered.

McClintic and her boyfriend, Michael Rafferty, were convicted of first-degree murder. They were sentenced to life with no chance at parole for 25 years.

The pair made headlines last year when Rafferty was transferred to a medium-security prison and McClintic was moved to a minimum-security healing lodge.

After public outcry, and outrage by Stafford's family, McClintic was moved from the Okimaw Ohci Healing Lodge near Maple Creek, Sask. to the maximum-security Edmonton Institution for Women.

The court application says she has since been transferred to Grand Valley Institution for Women in Kitchener, Ont., which is a minimum-medium security facility.

Justice John Henderson wrote in his decision Monday that McClintic "no longer has any connection to Alberta and its courts."

"It is unclear as to what basis an Alberta court has jurisdiction."

Henderson cancelled an appearance set for Friday and said McClintic has two weeks to file a written submission before the court decides whether to strike the application.

A request for comment to McClintic's Calgary lawyer, Kelsey Sitar, was not returned.

Healing lodges use Indigenous values, traditions and beliefs to help with inmates with their rehabilitation and get them ready to return to society.

Following McClintic's transfer to the healing lodge, the federal government announced changes to make it more difficult for prisoners serving long sentences to be moved to such facilities.

Under the new rules, prisoners are not eligible for transfers to lodges without secured perimeters until they near release.

The Correctional Service of Canada must also consider behaviour and how close inmates are to being eligible for unescorted temporary absences before they are transferred.

Ralph Goodale, Minister of Public Safety, said at the time that the changes apply to past and future cases.

"These are decisions that are not taken lightly or capriciously,'' Goodale said. "They are based on evidence and sound principles."