The bright side of saddest day of the year; Blue Monday

While we can't control weather patterns, or the sun, we can face one of the components of the equation head on
0
Jan 21, 2019 10:15 AM By: Natasha McKenty 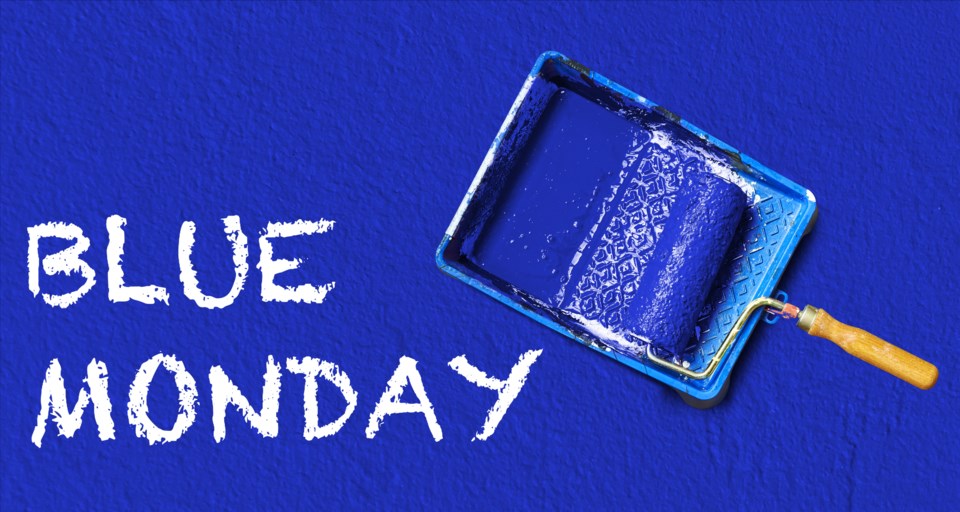 January, the most underappreciated month of the year. Known as one of the longest, coldest months, it also finds itself typecast as the unhappiest. Nestled between World Religion Day and National Hug Day, you'll find Blue Monday.

The theory behind Blue Monday suggests that the third Monday in January takes Mondays to a whole new level. This year, the 'saddest day of the year' falls on January 21.

What is Blue Monday and where did this unofficial day of sadness originate?

There is an actual mathematical calculation that predicts when it occurs. One of the components of the calculation includes the timing of when Christmas bills will begin to arrive. Couple this with our unmet expectations of cold-turkey resolutions, lack of daylight hours and a return to the daily grind, and we have ourselves a formula for the blues.

There are days dedicated to hats, sandwiches, and bubble wrap so why shouldn't sadness get one too? While Blue Monday has no actual scientific backing, we choose not to fact check the equation, burying our vitamin D deficient selves under a blanket of self-fulfilling misery.

It turns out the saddest day of the year's humble beginnings were a publicity stunt, released as part of a news release for a British travel company. The man behind the formula, Dr. Cliff Arnall, created the concept 14 years ago for Sky Travel.

"The formula uses many factors, including weather conditions, debt level (the difference between debt accumulated and our ability to pay), time since Christmas, time since failing our new year's resolutions, low motivational levels and feeling of a need to take action."

The first Blue Monday was January 24, 2005. Not everyone embraced the idea, in fact, neuroscientists have described the calculation as pseudoscience; meaning while it claims to be scientific it's never actually been proven factual.

In his defence, Arnall has said he identified the date "in a bid to encourage people, where possible, to take a positive outlook on the time of year as an opportunity for new beginnings and change." Although labelling a day as the 'saddest' seems like a setup to be, well, sad. The alternative could be to find solace in the fact that if Blue Monday is indeed the saddest day of the year - every day afterwards must be inherently happier.

While we can't control weather patterns, or the sun, we can face one of the components of the equation head on. Martha Adams, Certified Financial Planner with Tier One Investments says we should start by creating a plan that makes us feel like we are being proactive. When it comes to paying off holiday debts she suggests "starting with paying down/off the highest interest rate first and considering consolidating high interest rate into lower interest rate debt if you have availability. For example, if you have a credit card with 29% debt and a Line of Credit with available room and an interest rate of 7% you can utilize the lower interest rate to gain more traction from your payments. That means paying off your debt quicker and feeling like you're accomplishing more than just interest payments in the process."

The bright side to the sadness equation is we're heading towards the happiest day of the year. According to Arnall's calculations that day can be found on July 15, based on weather, extended daylight hours and reduced traffic - thanks to school vacation. If that feels too far off; the international day of happiness, which also happens to be the first day of spring, is March 20.

Express snap Titans win streak
Feb 24, 2020 7:23 AM
Comments
We welcome your feedback and encourage you to share your thoughts on this story. We ask that you be respectful of others and their points of view, refrain from personal attacks and stay on topic. To learn about our commenting policies and how we moderate, please read our Community Guidelines.