Take a vacation from hating your body, it's International No Diet Day

INDD was introduced as an effort to educate the dangers of dieting, emphasize the importance of eating for health, not weight-loss - and encourage body positivity
0
May 6, 2019 12:30 PM By: Natasha McKenty 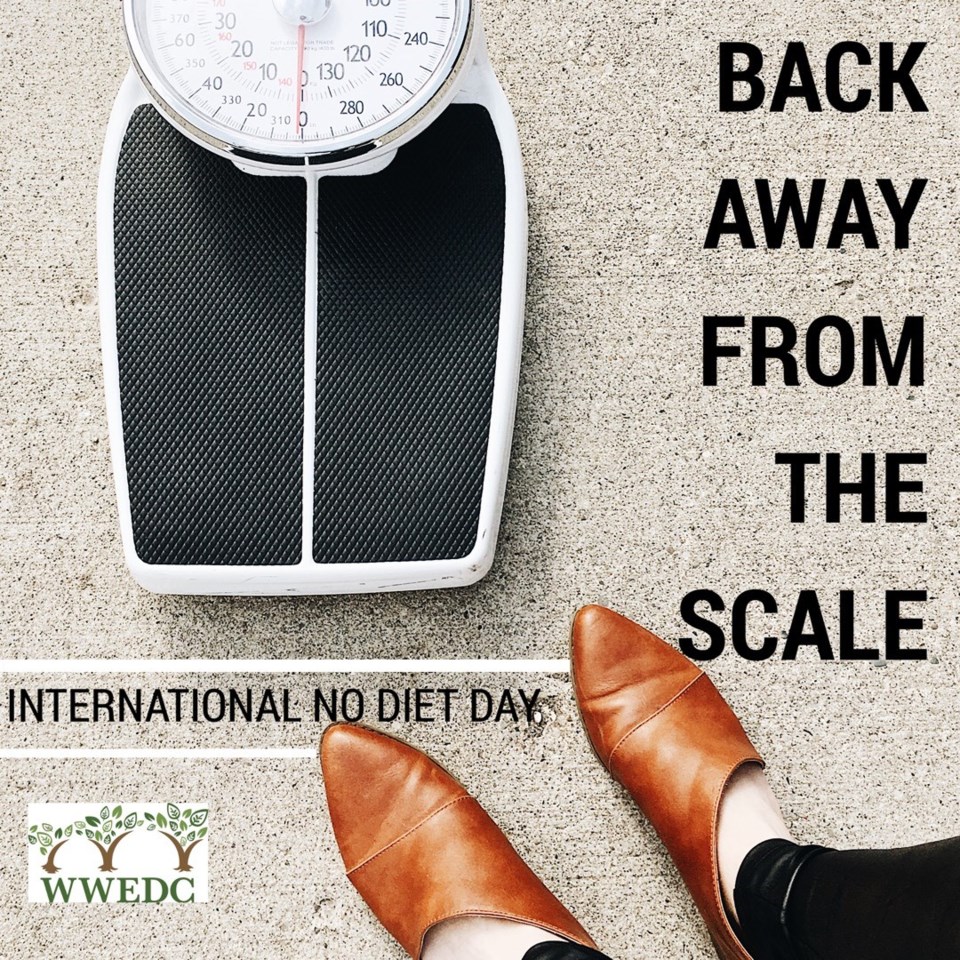 Toss the scale, abandon the calorie count and break out the elastic waistbands, it's International No Diet Day (INDD).

INDD was introduced as an effort to educate the dangers of dieting, emphasize the importance of eating for health, not weight-loss - and encourage body positivity. Stacey Reinsma, Social Worker with the Canadian Mental Health Association says, "people typically diet in an attempt to change and control their bodies, and by promoting a day where they don't do this, we are encouraging them to let their bodies be as they are."

Knowing that most diets fail, and result in disordered eating and eating disorders, Waterloo-Wellington Eating Disorders Coalition (WWEDC) has been promoting INDD for the last 10 years. They do so by reaching out to local store owners, asking them to display messages in storefront windows that encourage alternatives to dieting. This year, WWEDC has distributed to approximately 100 stores in Guelph, Kitchener, Cambridge, Waterloo, and St. Jacobs.

Debra Joseph is the owner of Twice is Nice, Twice the Man, in Uptown Waterloo. She has been participating for five years by placing the signs in her front window and on mirrors in dressing rooms. "We leave them up year-round. It's just nice to send a positive message to women of all shapes and sizes. We hear so many beautiful women come out of change room with negative messaging and body shaming. We want to reinforce a positive way of looking at themselves."

WWEDC says when storefronts participate than anyone who walks down the street sees a positive message wherever they look.  They believe that participation will help onlookers feel better about themselves after seeing these messages.

"This doesn't mean we have to like or love our bodies, but rather we choose a stance of being ok with our bodies that can deeply impact how we engage in our lives and with others," says Reinsma.

April Gates, registered Social Worker with The Wellness Collaborative and member of WWEDC adds, "store keepers, locally, welcome this one-week campaign and have received many positive comments from the public, applauding the body positive/affirmative messages that are so rarely broadcast in our present-day oppressive diet culture."

This year, in addition to window signs, WWEDC are also providing stickers for shop owners to place on changeroom mirrors. The positive messaging decals include: "Take a vacation from hating your body." "Change your mind, not your body." "Be a good role model - say positive things about your body." "26,000 diets have been invented. None work." "Don't fight your genes, just change your jeans."  "Confidence is beautiful. There is no ideal body" and "It takes a lot of willpower to give up dieting!"

Waterloo Region residents are encouraged to participate in the INDD body positivity awareness campaign. Residents can raise their voices on social media, by posting messages throughout the day and joining the fight against dieting, body-shaming and eating disorders using the hashtags: #edrecovery #eatingdisorderrecovery #nodieting #antidiet #losehatenotweight #bodypositive #healthateverysize #HAES #internationalnodietday

Joseph, of Twice is Nice, reiterates her desire to "gently reinforce a positive approach to looking at ourselves. One little store won't fight the social media tsunami, little grains of sand won't build a mountain. It's shocking how many beautiful women need to be more compassionate to themselves. Love yourself, just as you are - not 20 pounds from now."

For more information on eating disorders, size acceptance and the Health at Every Size movement, check out the following websites: National Eating Disorder Information Centre; Waterloo-Wellington Eating Disorders Coalition; or Healthy At Every Size.