It shows many Muslims feel Islamophobia is all around and there are very few places they can turn to
Jun 19, 2019 4:47 PM By: Phi Doan 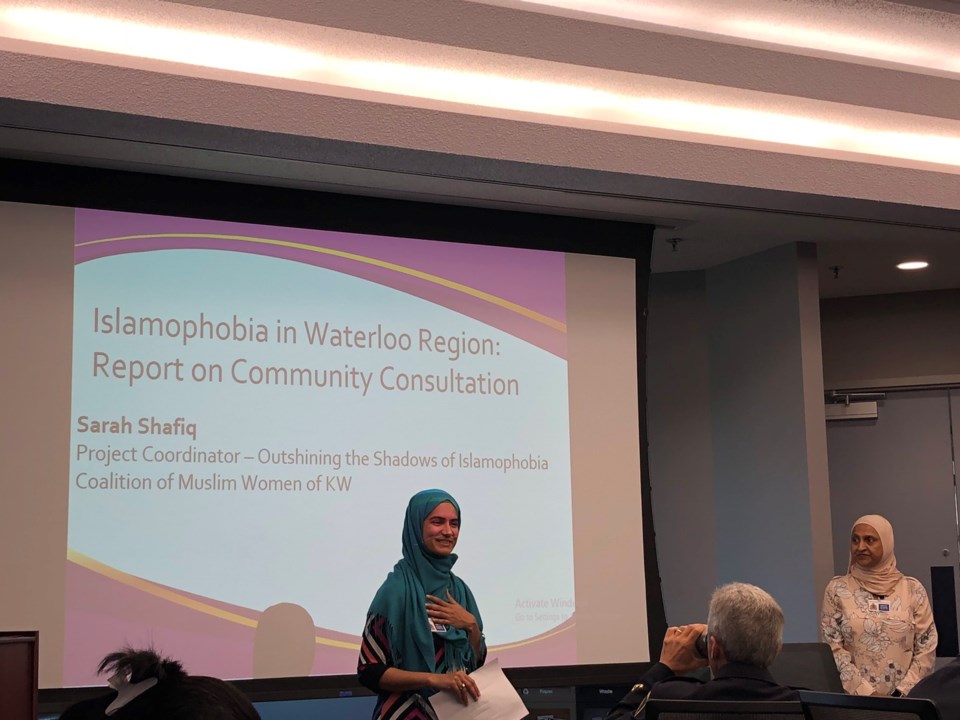 A joint effort between the Coalition of Muslim Women of KW and the Waterloo Region Crime Prevention Council saw the release of a report on Islamophobia in Waterloo Region.

The report was based off consultations with the local Muslim community back in November 2018.

Dr. Sarah Shafiq, with the Coalition of Muslim Women of KW, presented their findings to the police services board on Wednesday.

"We also asked where is Islamophobia present? In which spaces, in which institutions? And the community was very loud and clear that it is everywhere and specifically schools were mentioned, public spaces were mentioned."

They found that many Muslims had experienced Islamophobia or had a friend or family member experience it.

Many felt they couldn't turn to police when reporting hate incidences, which leads to an under reporting.

Shafiq says police mostly keep track of hate crimes and don't have the numbers for other incidents involving Islamophobia.

"Incidents that are not categorized as (hate) crime, so discrimination at workplaces or outside in the community, harassment, verbal harassment, so those would be fairly common."

Fazia Mazhar, Executive Director, Coalition of Muslim Women of KW says some of root cause of Islamophobia were a lack of education and the dehumanization of Muslims.

"In the absence of a reporting system for hate incidents, people who are at the receiving end of hate incidents are not able to really have any kind of resolution for happens. A lot of times it actually is their internalizing it and not being able to talk to anyone. It doesn't help the sense of belonging."

Waterloo Regional Police Chief Bryan Larkin says their officers do document and investigate hate incidents too, but are able to track it in their reporting systems.

"Right now our records management doesn't allow for similar coding. So it's either a hate crime or it's not and I think that is where we need to do some of the work, that's a little more complex cause it requires programming." he added.

The report presented five recommendations to the police board:

"The recommendations they provided are already recommendation that we're working towards, so with our Equity and Inclusion, Diversity Unit, I would envision all of them being adopted and processed into the organization."

He also says they are open to solutions that will allow for better reporting of hate incidents.

"We've got to modernize the way we do work and the Coalition of Muslim Women can be a natural bridge, so if somebody's not comfortable coming to us directly, there's nothing stopping us from having a liaison or connection with their organization where they can introduce and ensure and remind people that this is a safe place. You can come to police and report."

The full report is available on the Crime Prevention Council's website.