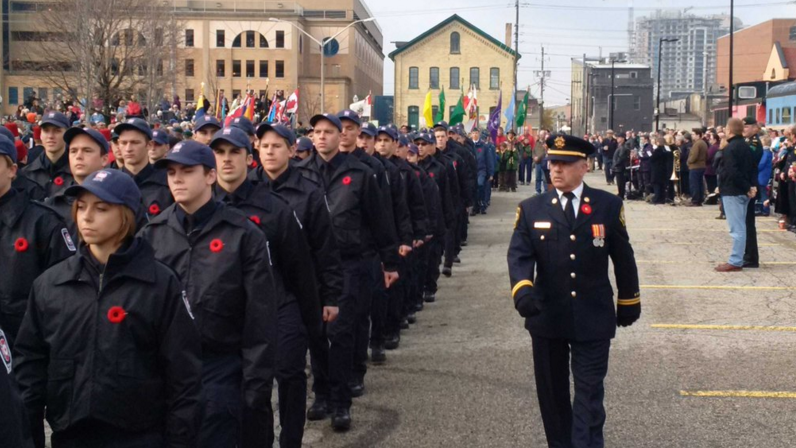 A large crowd gathers at the corner of Regina and William in Waterloo for the annual Remembrance Day ceremony. File Photo.

Sunday, residents aren't just observing Remembrance Day, but the 100th anniversary of the end of World War I.

A parade will be held Sunday morning at 10:15 a.m. in Kitchener on Ontario Street between Duke Street and King Street. The parade ends at the cenotaph on the corner of Frederick and Duke. Service is set for 10:45 a.m. at the Cenotaph. The Regional Police Ceremonial Band and Chorus will also be attending.

Chris Pickering is a British Army and Naval Veteran, serves as the President of Royal Canadian Legion Branch 50, and organizes the Remembrance Day event in Kitchener.

Pickering told The Mike Farwell Show on 570 NEWS, the army cadets standing vigil at the Cenotaph overnight will be joined in the morning by two full-size metal cut outs of World War One soldiers. The City of Kitchener will install them Sunday morning for the service.

Pickering said a Montreal man with a local connection will be laying down a wreath at the ceremony.

"This gentleman, his uncle was in World War I---he got killed, he got a military medal and he asked if he could come and lay a wreath this year at our ceremony and we said yes," says Pickering. "His uncle---the house he lived in, was in the exact spot where our cenotaph sits now."

"Anytime that you walk down the street and you see a veteran, you should shake his hand and thank him. It's a 365 day event," he said.

Ontario announces $12M investment in online mental health supports
Apr 2, 2020 1:38 PM
Comments
We welcome your feedback and encourage you to share your thoughts on this story. We ask that you be respectful of others and their points of view, refrain from personal attacks and stay on topic. To learn about our commenting policies and how we moderate, please read our Community Guidelines.