Two adult occupants are in hospital after the single vehicle collision on Saturday afternoon
Sep 27, 2020 2:30 PM By: Luke Schulz 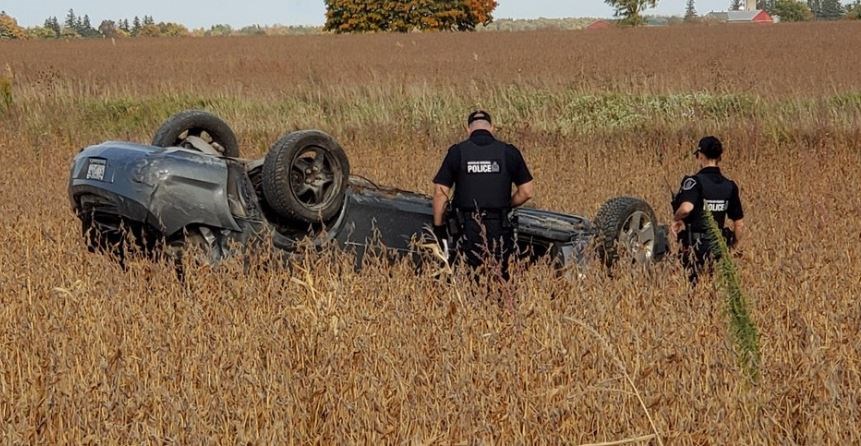 The vehicle came to rest in a neighbouring farm field. Photo courtesy of WRPS_Traffic on Twitter.

Two people are in hospital after a vehicle roll-over in Wellesley Township on Saturday afternoon. Regional police say they responded to a call around 2:36PM on Saturday of a single-vehicle collision in the area of Road 116.

Upon arrival, police located a vehicle resting on its roof in a nearby farm field with major damage. Initial reports say the vehicle was traveling southbound on Road 116 when it left the road – leaving the two adult occupants with serious injuries. The cause of the crash has not yet been specified.

TSU on scene at a serious MVC on Road 116 Wellesley Township.
Roadway will be closed for a few hours while officers investigate. The RPV will be in the air to assist with scene measurements. @WRPS_RPV@WRPSToday pic.twitter.com/uMfUH8GAaX

The occupants – one male and one female – were taken to hospital with serious injuries: one by air ambulance to London and the other by ambulance.

The ages of the occupants have not yet been released, though police have confirmed that both are from Stratford.

Regional Police's Traffic Unit closed the road  until 8:00PM on Saturday to conduct their investigation in coordination with the Ontario Provincial Police.

The investigation into the crash is still ongoing, with charges pending.