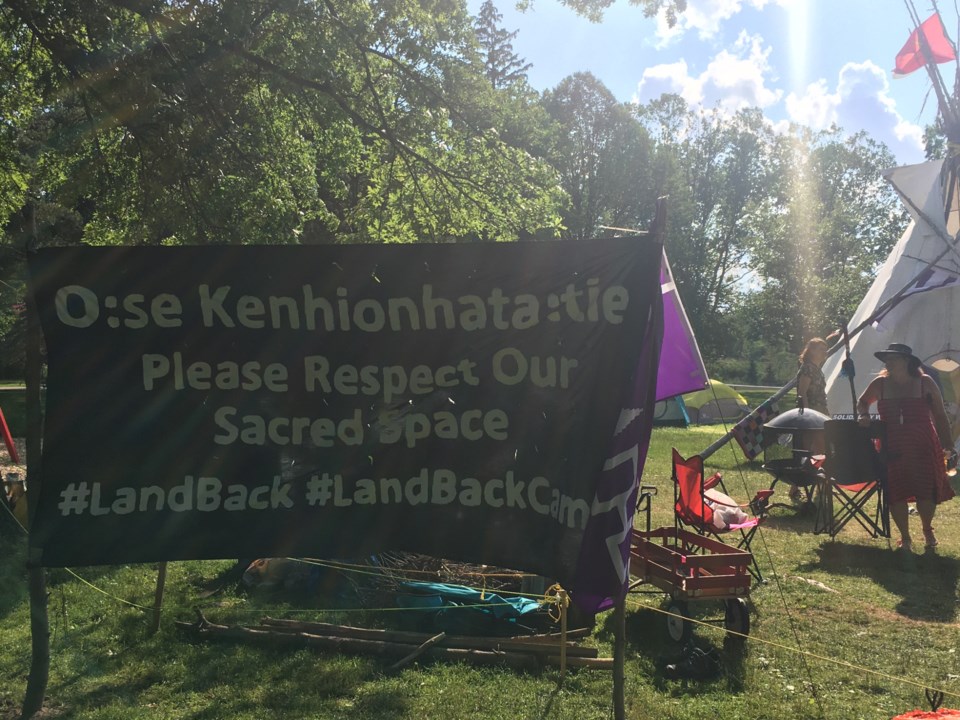 The Indigenous Land Back Camp has been set up in Victoria Park since June 20. Phi Doan/ KitchenerToday

Regional Council is facing criticism over it's lack of engagement with Indigenous activists, during Thursday's virtual council meeting.

Members of the Land Back Camp in Victoria Park were presenting their petition to council, and making their case about the importance of---and lack of---Indigenous spaces within the region.

"There are First Nation, Metis and Inuit youth who have not been able to access their culture, their songs, their language in this urban space," said co-organizer Amy Smoke at the meeting. Smoke spoke of their own experiences growing up disconnected to their culture. They had formally been homeless, incarcerated, a sex worker and a drug addict, until connecting with the few Indigenous spaces available in the region: the White Owl Native Ancestry Association, the Healing of the Seven Generation and post-secondary Indigenous spaces.

Smoke feed was mired in connectivity issues, resulting in a choppy feed. Some community members watching expressed disappointment that Smoke was not given a second chance to call into the meeting on a more secure line. A full transcript was later released by the group, here.

While the Land Back Camp is not trying to replicate the work of existing groups, they found themselves fulfilling a service gap for the youth staying at the camp.

"We're not asking simply of waiving of fees or land use as one would for a family picnic. We are demanding our sovereignty treaty rights as Indigenous people," said co-organizer Terre Chartrand. "Rights guaranteed in our agreement as well as the Ontario Human Rights Code, the TRC (Truth and Reconciliation Commission), through UNDRIP (United Nations Declaration on the Rights of Indigenous Peoples), through the Murdered and Missing Indigenous Summary Report, through Feathers of Hope report, and your own moral obligations as the corporations of your municipalities to honour these agreements."

The Land Back petition presented to council not only called for the waiving of fees for Indigenous events and ceremonies, but also land in Victoria Park and Waterloo Park be given over as for those purposes as well. They also demand that the cities create a paid positions for Indigenous people to engage in reconciliation work, along with a paid Indigenous advisory committee.

Melissa Bowman and Susan Cadell of Waterloo Region Yes in My Backyard (WR YIMBY) also showed up as delegates, throwing their support behind the Land Back Camp.

Following the meeting, delegates walked away feeling dismayed and ignored by council.

Disappointing that 4 delegations spoke @RegionWaterloo this evening about demands of #Landback & not one councilor came forward with any questions for any of us. It was like crickets, & ultimately another way to erase Indigenous peoples.@amysmoke1 @m2bowman @SusanCadell

Lori Campbell, director of the’ Waterloo Indigenous Student Centre at the University of Waterloo, spoke with the Mike Farwell Show on 570 NEWS following the meeting. Their delegation had requested ahead of the meeting that council hold onto their questions until all their delegates spoke.

"When it came time to ask for questions, it was crickets," she said. "There was absolutely zero question that came back at us, so it was a good example just complete erasure of whether or not we were there or not, and whether they had any interest in listening to us."

"It's ambiguous because it appears as though council has not been specific in seeking an Indigenous consultant, but rather someone who consults with Indigenous peoples. That is something entirely different," she said at the meeting. Campbell noted that the Land Back Camp had not requested this, and was asking for an Indigenous person to lead the work.

Some of those concerns were briefly touched on near the very end of the meeting. Regional Councillor Tom Galloway questioned Jane Albright. Commissioner, Human Resources and Citizen Service, to elaborate on the procurement process. Albright says they have received recommendations of possible candidates from the Wellbeing Waterloo Region Indigenous Advisory Circle, and are in the process of reaching out to them.

"The terms and conditions and the deliverables are quite broad because we very much wanted the group that will be advising the committee to be able to provide recommendations on what that process and what that consultation should look like," she said.

Meanwhile, Campbell spoke about another contentious topic while on the Mike Farwell Show. This upcoming Monday, Wilmot Council will be discussing their options when it comes to relocating the Sir John A. Macdonald statue in Baden, and storing the remaining statue not yet put up.

Campbell took issues with the idea that people with much more money can pay for the privilege of keeping the controversial figure in public. She says the Baden statue should go into storage and remain there until the proper consultations are complete as promised.

"That statue has been relocated how many times because it continues to run out of town, like how far do we have to push it? Do we need to push it right out into the great lakes in order to have it disappear, like come on," she joked.

Campbell says we should not forget history, which is why Sir John A. Macdonald's place in society should lie in education.

"And so that's where I think learning opportunities like within a museum or with our education systems---so in the textbooks and the teaching---are two options to speak about this figure."