The camp is expected to remain in Victoria park until a permanent ceremony space is given to the local Indigenous community
Jun 27, 2020 1:30 PM By: Phi Doan 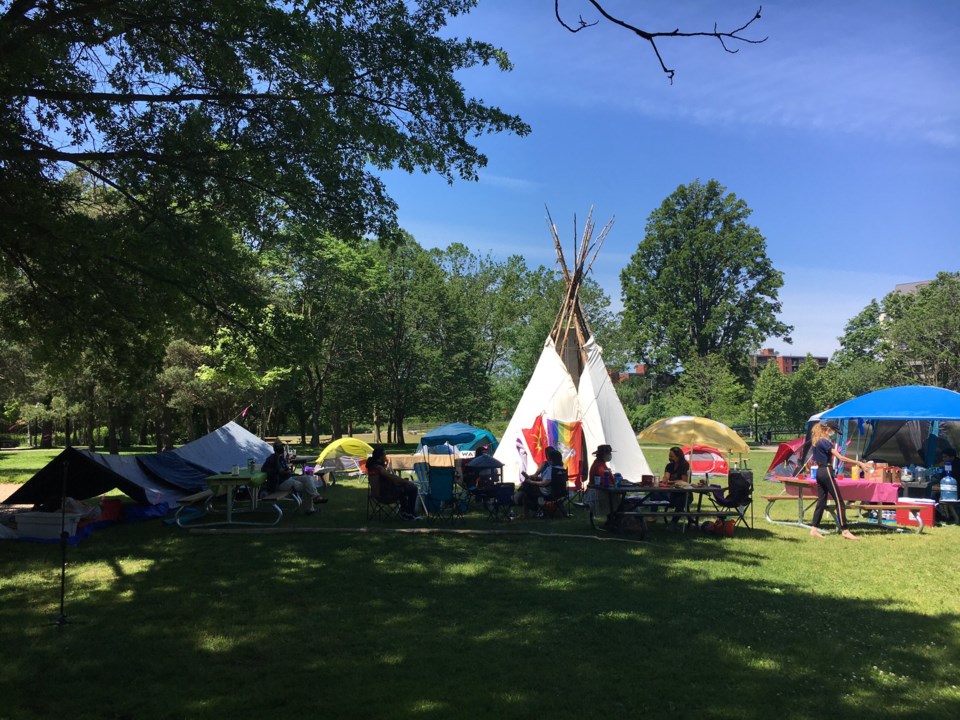 An Indigenous group has been camping out in Victoria Park to draw attention to the lack of permanent Indigenous spaces within Waterloo Region. Phi Doan/ Kitchener Today

An Indigenous group camped out in Victoria park finally got their meeting with the mayors they've been asking for, and both sides walked away with a positive outlook.

Waterloo Mayor Dave Jaworsky met with the group early Friday morning, before returning in the afternoon with Kitchener Mayor Berry Vrbanovic in tow.

"We started on a journey as a council this term, focusing on issues, diversity and inclusion, and I think we recognize, particularly, over the last few weeks that as a community, we have a lot to do in terms of anti-Black racism, anti-Indigenous racism and systemic discrimination, and today further affirmed for me," Vrbanovic said.

The organizers, Amy Smoke and Terre Chartrand, spoke at length about their demands and the issues facing the local Indigenous community.

The camp itself had set up their tents and tipi the evening before National Indigenous Peoples Day, last Sunday. It was meant to send a message, but the group did not think of it as a protest. Rather it was them exercising their treaty rights as outlined in the Indian Act, Canadian Constitution and in the R v Sundown decision.

The group had every right to set up on public land for ceremonial use. Setting up in Victoria Park was to highlight the lack of permanent Indigenous spaces within the region. The Indigenous community would have to pay to rent out a space within the park; the land of which had been a traditional gathering spot for their people for hundreds of years.

"The connection and the tie is along the Grand River and that's something we want to explore as well," Vrbanovic said. "Part of the issue obviously has been cost and I've committed to taking that away."

Vrbanovic committed to looking into providing accessible washrooms and a wifi hotspot for the campsite. Municipal officials will be the main point of contact from now on, after the group informed the mayors of their less than positive interactions with police and bylaw during the week. In one instance, an officer had allegedly harassed an elder who was visiting for the day.

The camp itself will remain in Victoria Park, until a permanent Indigenous space is established. Organizer Chartrand says they will remain in the park for as long as necessary, even going into the winter if their demands aren't met by then.

"Very little impact on the land; it's cleaner than it was before we got here. If anything, we will be conducting improvements to the space, and over the winter. It won't be my first winter outside," she said, mentioning that she was already planning a garden.

The organizers are also prepping for July 1. For many Indigenous peoples, Canada Day is not a day of celebrations, but a day to mourn and reflect on their own history, as well as educate others on the issues they face.

"I am not a Canadian. I do not celebrate the birth of a country on my lands, and a lot of Indigenous folks feel the same way, and it's a day for us to gather together and remember what was here. Remember what we survived." Smoke said.

Just over the past few months, the country has seen a number of incidents where Indigenous people have been abused or died at the hands of police. Locally, racist flyers targeting interracial couples have been handed out, and the Sir John A. MacDonald statue in Baden continues to be a lightning rod of controversy.