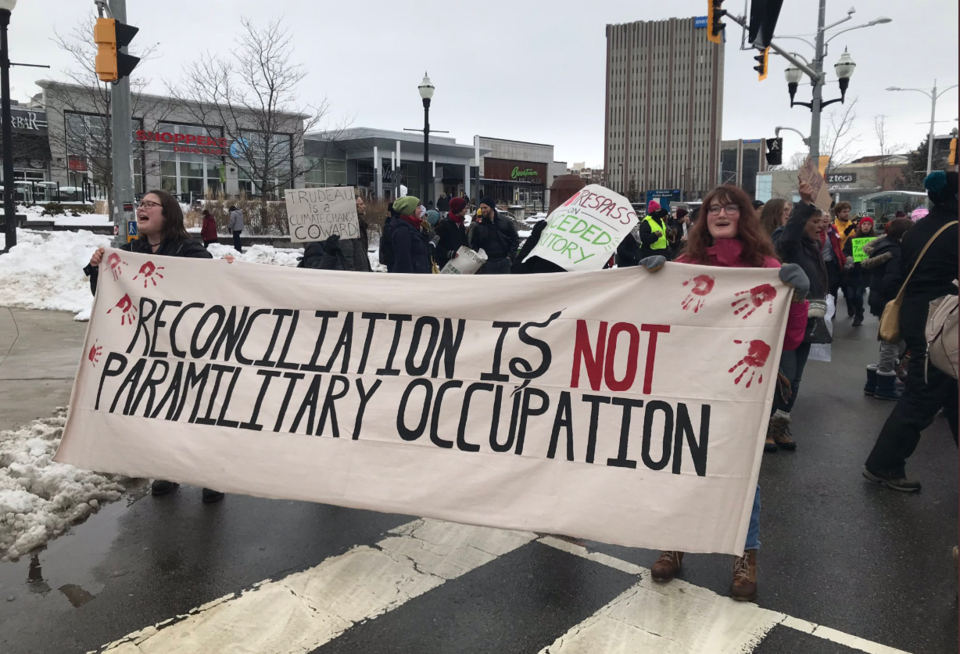 A conflict in British Columbia is being felt in Waterloo Region.

Demonstrators marched from the University of Waterloo to Waterloo City Hall, briefly blocking several intersections along the way.

Sydney Hannusch is a student with UW and is also part of the Indigenous Student Association, and tells 570 NEWS that it's part of solidarity action happening across Canada.

"We're standing in solidarity, with the rest of Canada, for the people of Wet'suwet'en and their territory," explained Hannusch. "That's currently being occupied forcefully by the RCMP and the Canadian Government unlawfully."

For a summary on the situation in British Columbia, and how it came to this point, click here.

"Canadian citizens, allies and Indigenous people who are on these lands, who these lands belong to, we do not consent to this," said Hannusch. "We want to show support and solidarity to the land defenders that are in Wet'suwet'en right now."

As far as why the protesters wanted to block local intersections, Hannusch explained it's important to be loud and take up space, especially for those who don't know what's happening.

"When we're silent about it, silence is complicity," said Hannusch. "We want to let other people know, because there are a lot of students as well as other people within Waterloo Region that might not know what's going on."

She also added that the solution to the conflict in British Columbia is quite simple.

"The solution is for the government to abide by its own laws. Wet'suwet'en is its own sovereign nation, they have full control over their own territory, and the government coming in and breaking that law is going against what they set up in 1997," explained Hannusch. "We want the RCMP and the Canadian Government to step off the territory, and not to build a pipeline unless they consent to it, which they have not."

She also said some the ways to support their cause is to have your voice heard by contacting your local governmental representative, going to this website, and being mindful of where your news is coming from.

"Often mainstream media twists these kind of conversations, and make it seems as if Indigenous people are the violent ones. I think it's important that we're getting our information from Indigenous voices who it's impacting the most."

A spokesperson for the ISA at the University of Waterloo says that six protesters were issued trespassing tickets for $65 each after they refused to leave Member of Parliament Bardish Chagger's office in Waterloo. Chagger is also the Minister of Diversity and Inclusion and Youth.

570 NEWS reached out to Minister Chagger for comment. Below is a statement she issued in the evening.

"Earlier today, individuals arrived at my office to voice concerns they have. I was able to listen and speak with them.

I have the utmost respect for the freedom of expression, indeed it is a cornerstone of our democracy. I also recognize the need to keep the safety and security of individuals in mind. As my office is located within Waterloo City Hall, an operation decision was made by authorities.

As the Member of Parliament for Waterloo, I am always available to engage with constituents on issues that matter most to them."

Protesters are making their way down King in solidarity with Wet’suwet’en people. @570NEWS pic.twitter.com/DH82aX4QwR

Electricity rates going up in Ontario this weekend as pandemic measures end
Oct 30, 2020 11:10 AM
Comments
We welcome your feedback and encourage you to share your thoughts. We ask that you be respectful of others and their points of view, refrain from personal attacks and stay on topic. To learn about our commenting policies and how we moderate, please read our Community Guidelines.