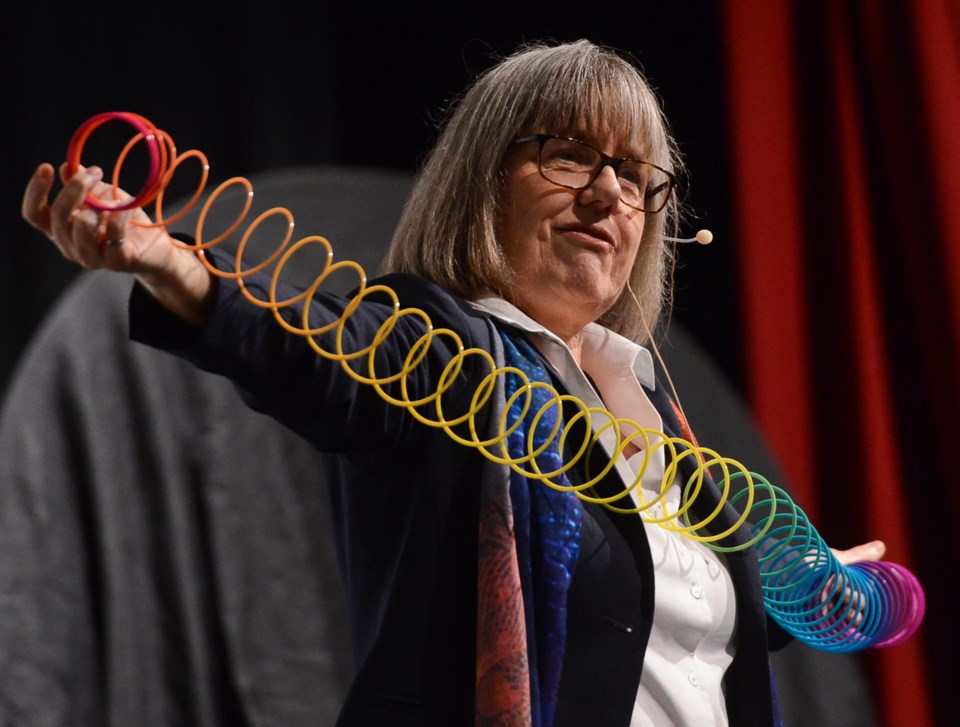 School may not be for everyone, but it certainly was for Donna Strickland.

Since late last year the Guelph native has been known as a Nobel Prize winning Donna Strickland after receiving the honour for her work in helping invent chirped pulse amplification, a type of laser now used in such things as optical surgery.

Strickland, 59, returned to her old stomping grounds Friday, speaking to students at Guelph CVI high school, where she graduated from in 1977.

“I knew when I was at Victory school that I belonged in school,” she said of her elementary days at Victory Public School.

Jim Forsyth, her homeroom teacher for her five years at GCVI and her Grade 13 science teacher, was also on hand for Friday’s event.

It was Forsyth who would report to Strickland’s mother, also a schoolteacher, if she didn’t do well on a test, Strickland said with a laugh.

A self-described painfully shy girl growing up, Strickland was in the GCVI band and enjoyed the outers club.

“I played second clarinet because I was no good, but it got me a trip to England,” she said.

She went to the University of Waterloo after graduating GCVI  to study physics primarily because she wanted to differentiate herself from her sister, who was studying math at Waterloo.

From there it was grad school, having been turned down in Arizona she landed in Rochester, N.Y.

Her PhD research that led to the Nobel honour was completed in 1985.

“I don’t know why every parent wants their child to be a doctor or lawyer,” she said when asked about her choice of physics.

In discussing her work she told the students “I’ve had failures my whole career” but lives by the philosophy of moving forward.

“There’s been a lot of failure all the way along. I just keep going. Mostly I just keep moving forward,” she told students.

There were no interviews with media Friday, just the presentation and questions from students.

Students really wanted to hear about her Nobel Prize.

Six days in Sweden were a whirlwind of appearances, parties, dinners with royalty, interviews and lessons on “how to take your medal from the king’s hand.”

A party for family and friends of she and co-recipient Gérard Mourou included a roast by her son, a comedy student.

“They asked me if I wanted my husband to say a speech, but I said ‘no, he’s a weeper,’” Strickland said to laughs from the audience.

Finally it was two hours of makeup and hair before the four-hour televised ceremony, shown live around the world, except in North America.

Since returning Strickland has spent most of her time travelling and talking about the Nobel Prize and the work that led to it.

Coming up are trips to Harvard, France, Switzerland and Rome.

About the Author: Tony Saxon

Tony Saxon has had a rich and varied 20 year career as a journalist, an award winning correspondent, columnist, reporter, feature writer and photographer.
Read more