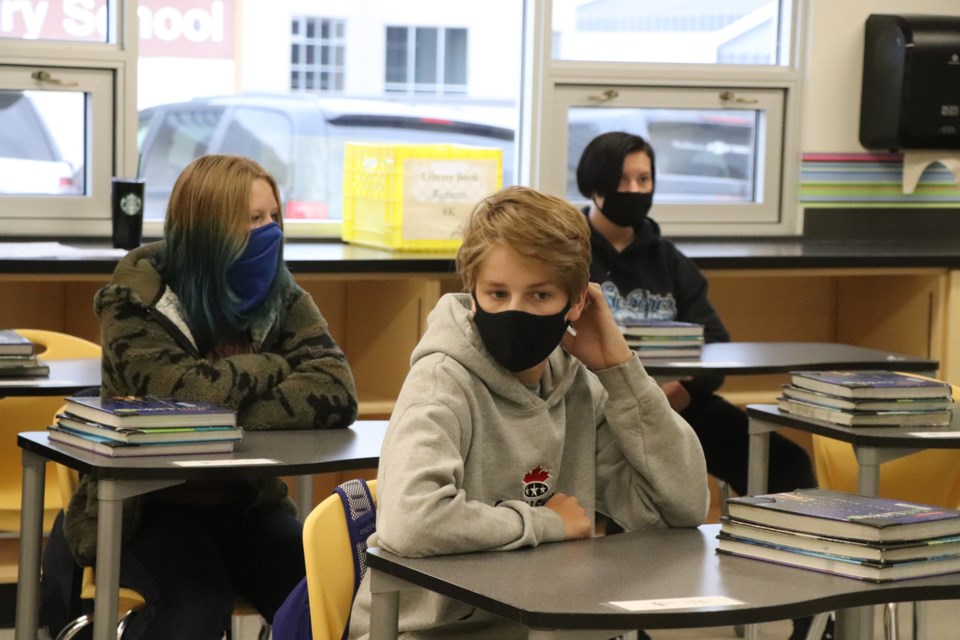 Students at Innisfail's St. Marguerite Bourgeoys Catholic School finally make it to their first traditional class on Aug. 31 since being shut down last March from the COVID-19 pandemic. Johnnie Bachusky/MVP Photo

Saying time had run out for the governing Conservatives to act on their own, the NDP Leader tabled a motion on Thursday that would have forced the Ford Tories to limit class sizes across the province to 15.

It came as the Premier announced a reduction in social gathering limits for COVID-19 hot spots, slashing the limits from 50 people inside and 100 outside down to just 10 indoors and 25 outdoors.

"We will throw the book at you if you break the rules," said Doug Ford at his daily update. "We can't afford to let a few rule breakers reverse all the hard work and progress the people of Ontario have made over the past six months.''

The changes did raise questions from opposition parties.

"If we're concerned about social distancing, if we believe that it's necessary for people, especially indoors, to keep a distance of two metres, than why on Earth aren't we protecting the health and safety of our children in the same way," said NDP Leader Andrea Horwath.

"They're expressing that with their feet, and as they're bringing their kids into schools they're seeing the chaos there and they're pulling them out and putting them into the online options."

"If the Premier is cracking down on social gatherings, then how can he defend 30 students jammed into a classroom?" asked Schreiner in a statement. "It is hypocritical for the Premier to mandate smaller dinner parties, while continuing to put our children at risk."

The motion failed to pass in the legislature by a vote of 54 to 29.

Police looking for $500K in stolen webcams
Oct 28, 2020 9:00 AM
Comments
We welcome your feedback and encourage you to share your thoughts. We ask that you be respectful of others and their points of view, refrain from personal attacks and stay on topic. To learn about our commenting policies and how we moderate, please read our Community Guidelines.