The town hall covered the current state of firearm rights going into the federal election
0
Aug 23, 2019 5:20 AM By: Phi Doan 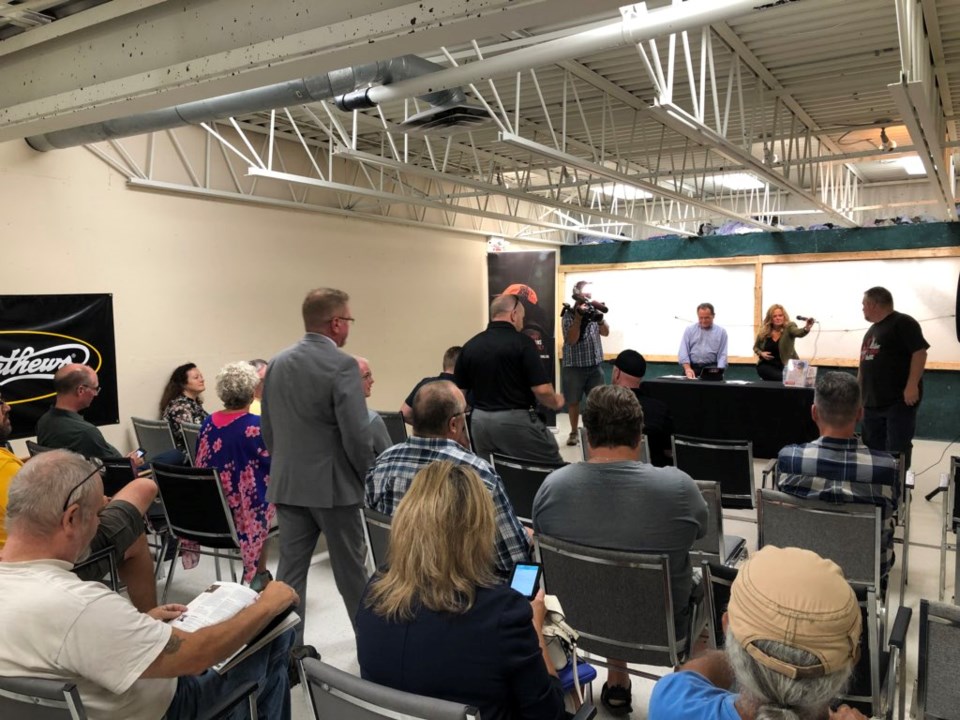 Kitchener-Conestoga MP Harold Albrecht alongside CCFR VP of Public Relations Tracy Wilson for a town hall at Shooter's Choice in Waterloo. They cover the current state of firearm rights in the lead up to the federal elections. Phi Doan/ Kitchener Today

Gun owners gathered at Shooter's Choice in Waterloo for a town hall meeting on the current state of firearm rights going into the federal election.

She opened with an overview of Bill C-71, which saw royal assent earlier this year, and the number of regulation placed on legal gun owner. This is on top of what was a "very comprehensive system" already.

"I don't think there's any change that needs to be done there." she says. "There's a series of tests you have to score 80 per cent or above, the application requires to provide all your personal information, personal references to vouch for you. You got to provide your partner's name if you're married or in a common-law relationship, they got to provide permission. If you're not currently in a relationship, you have to provide your partners for the last two year, conjugal partners, so it's pretty invasive."

Bill C-71 adds a number of proposed measures on top of that. According to Wilson, one provision surrounds private sellers that requires owners to obtain permission and a reference number from the Registrar for non-restricted firearms, such as shotguns and rifles, before transferring gun ownership. She calls it a gun registry and waste of money, pointing to the repealed long gun registry of the past.

Despite receiving royal assent, the bill has not yet been put into action, much to the relief of Wilson.

The town hall eventually turn to the question of gun violence, but the two speakers reframed it as "gang violence."

The two of them say Canada needed to tackle gang violence and that pursuing gun regulations, like hand gun bans, was a waste of time and resources. Wilson took aim at Prime Minister Justin Trudeau flirting with the idea of a ban after visiting Toronto.

"For him to go there and basically the answer is 'wait 'til you see my platform, which we haven't release yet because we're trying to decide which guns we can ban to get the most votes'."

According to Wilson, it wouldn't make a difference in crime levels, because it targeted legal gun owners, whereas guns used by gangs were obtained illegally.

She says they had to invest into community initiatives that deterred people from joining gangs by promoting education, youth outreach, job opportunities etc.

Albrecht took the opportunity to push the Progressive Conservative platform on the issue. It was based around three pillars: cracking down on gangs, gun laws that target criminals, and equipping police. All without any new additions to legal gun owners with a strong focus on gang members and keeping guns out of their hands.

"As a rural person myself, I know that many of our farmers have a rifle on their property to deal with groundhogs or raccoons," Albrecht says. "It's important that we, as political people, hear them."

Before the start of the town hall, the People's Party of Canada had made an appearance. The Kitchener-Conestoga candidate Koltyn H. Wallar had decided to try an insert himself into the proceeding despite not being involved in its planning nor being invited.

He was joined by the Waterloo candidate Erika Traub and was given an earful from Wilson for trying to "hijack" the event.

Wallar left before the event started and Traub quietly stayed in the audience.