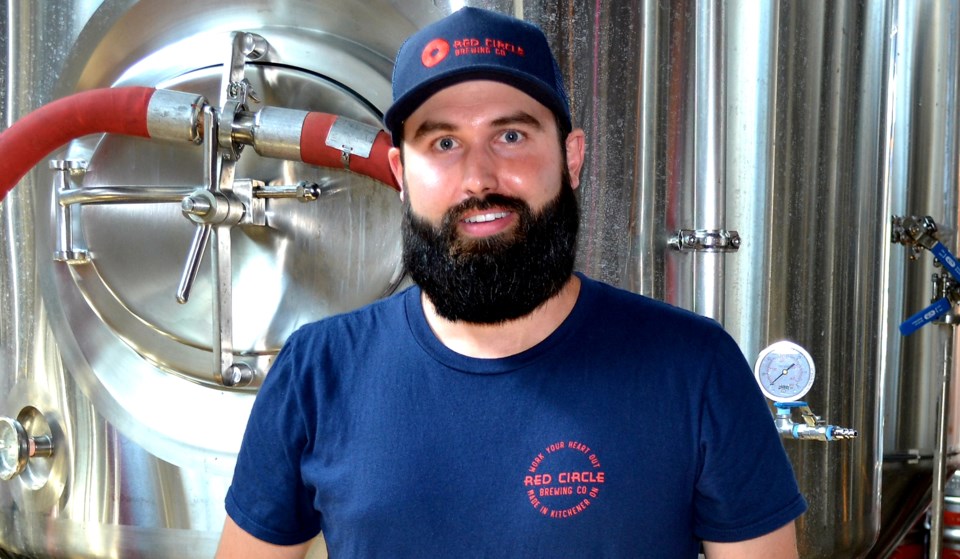 Growing up around beer, you'd think the son of beer industry veteran might choose a different career path than his father. Quite the opposite; Brett Croft is diving into the beer business with both feet as the co-founder and brewmaster behind Kitchener’s newest brewery.

Red Circle Brewing Co. is the latest newcomer to the region's rapidly-expanding craft beer scene. The brewery is part of the Red Circle trifecta within the Catalyst 137 technology hub which includes Red Circle Coffee Co. and Graffiti Market.

Croft jokes that he grew up in a brewery because his father was a seasoned 30-year veteran of the beer industry. Croft himself has over a decade of experience and puts his expertise to good use as Red Circle Brewing Co.’s esteemed brewmaster.

“I was taking Prud-homme; the beer sommelier course. The final part of that course is creating a recipe and brewing it at Amsterdam Brewing in Toronto on their pilot system” Croft said. “After I did that, it was the moment I realized ‘I’ve got to become a brewer’.”

Red Circle Brewing Co. has a distinct “tech touch” to the brewpub. The digital tables inside Graffiti Market are a first in North America where customers can order their meal using the touchpad table.

Red Circle Brewing Co. also features an open concept brewing area where customers can pull up a stool, enjoy a pint and speak with the brewers as they make the beer just a few feet away.

“You feel like you’re in the brewery, you’re a part of the process as you drink the beer overlooking all the vessels we have” Croft explained. “The great part of this space is talking and interacting with people as they try my beer. It’s real-time feedback."

Another unique aspect about Red Circle Brewing Co. is one of their flagship beers, their “Night Shift” coffee porter. One of the ingredients in the beer recipe is Red Circle Coffee, brewed in-house and mixed in with the beer.

“After 24 hours of roasting, we bring it over and use it in the beer as we package it. We worked with the roastmaster and did a cupping seminar and tried all the roasts” Croft explained. “We hand-selected the one that worked well with my base recipe porter and matched the two together.”

Aside from the coffee porter, Red Circle Brewing Co. features three additional flagship beers: the Belmont Village Blonde Ale, the Iron Horse Trail IPA and the Sand Hills Farmhouse Ale. Each name and style of beer is an homage to the Kitchener-Waterloo community and the pioneers who helped establish its roots.

In addition to their flagships, Croft is constantly cooking up special one-off beers which are only available inside the brewpub. An especially intriguing beer is their newest offering; a dry-hopped cherry gose called "Cherry Blaster", brewed with 300 pounds of sour cherries from Niagara.

One special Red Circle concoction has a great personal meaning to an employee facing the battle of her life. “We just released a citrus saison called 'Sarah’ in honour of a Graffiti Market employee who was just diagnosed with cancer. We created that beer for her to support her in her fight against cancer” Croft said.

Asking a brewmaster to choose their favourite style of beer is a little like asking a parent who their favourite child is, but Croft chose the reliable India pale ale. “I always think there’s a beer for a time and place, but if I had to choose one, I’d choose IPA. With IPA's, you’re balancing malt and hops in a delicate way without being overly offensive.”