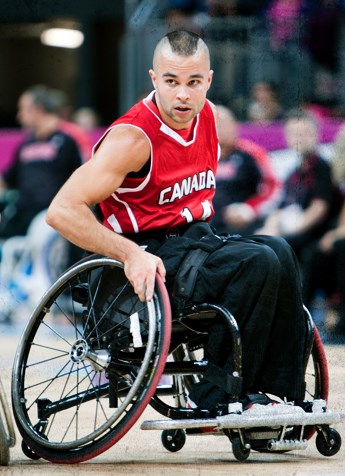 Wheelchair basketball players for our national team are gathering in Toronto for training, as they gear up to head overseas for the International World Basketball Federation World Championship.

Among them is Kitchener's Tyler Miller.

Speaking with Kitchener Today, the Paralympic gold medalist says his start in Waterloo Region was a huge factor in his career success.

It all started in 2007, Miller had been in a workplace accident and a friend, in Miller's words, "dragged him out to Twin City Spinners."

Fast-forward eleven years, and Miller has quite the resume with a Paralympic gold medal under his belt from the 2012 London games, and a bronze medal at the 2011 Parapan American Games.

"People don't realize how blessed we are to not just live in an amazing country, but an amazing region of Kitchener-Waterloo, we have so many resources...The wheelchairs we play in can cost 4-5 thousand dollars apiece, our local program in Kitchener-Waterloo has those and can lend them to people...we have access to world class facilities, RIM Park has amazing basketball courts."

This will be Miller's second World Championship. He has this advice for anyone looking to enter the wheelchair basketball world.

'Whether it's someone, you have been in an accident and have been hurt or even just, you know you need to get involved and be active again, Kitchener-Waterloo can be the centre of that, because we have the resources to get active, whether you're hurt or an able bodied person."

The IWBF World Championships get underway from August 16-26th in Hamburg, Germany. Miller says they have a great team and as long as they do what they are capable of doing, they should be on the podium.