Olympic boxer holding out hope after being left unable to qualify due to maternity leave, pandemic cancellations
May 1, 2021 4:30 PM By: Luke Schulz 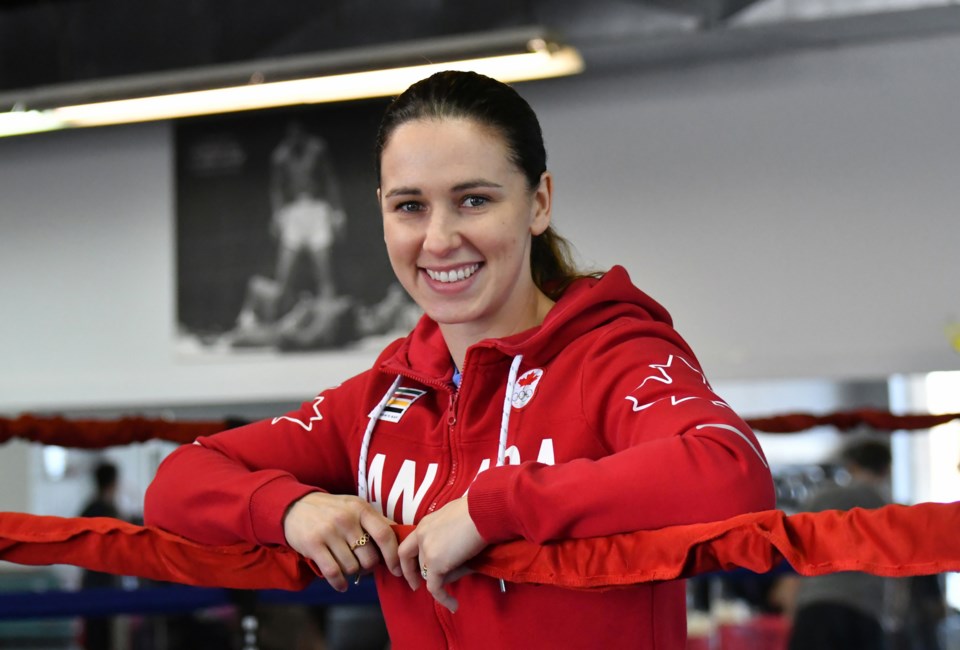 Mandy Bujold leans against the ropes of the ring at Guelph's TNT Boxing and Fitness Academy's on Dawson Road. Rob Massey for GuelphToday

Setting a deadline for response on Monday, Kitchener Olympic boxing star Mandy Bujold is exploring legal options and considering a discrimination legal challenge before the Court of Arbitration for Sport after having her competitive year ‘wiped out’ due to the COVID-19 pandemic.

After taking maternity leave for the birth of her daughter Kate in 2018, Bujold was prepared to fight for an Olympic position in the Olympic qualifier in Argentina – though that event was cancelled for the second consecutive year due to rising COVID-19 case counts.

With no further competitions on the schedule ahead of the July 2021 Tokyo Olympic games, the International Olympic Committee (IOC) has made the decision to allocate its remaining 49 quota spots through three events between 2018 and 2019 – an eleven-month period in which Bujold didn’t compete. Ranked second before her maternity leave, the 11-time national flyweight champion could now miss the Tokyo games completely – though she’s earned top three podium finishes since her return to the sport.

Appealing to the IOC and seeking legal counsel in her friend Sylvie Rodrigue, Bujold has since sent an argument to the IOC for a rule that takes into consideration women who may have been “pregnant or postpartum” during that 11 month time frame – following up with a reminder letter on April 29 – though she has yet to receive a response.

Speaking with 570 NEWS to the potential legal challenge ahead, Bujold said the discrimination challenge is based on sex – as she noted that the eleven month period chosen by the IOC puts her out of competition because she’s a female who took that time off for her pregnancy.

“The same situation would not apply to a male in boxing right now,” said Bujold. “I know when I initially brought this forward [to Rodrigue], it took her all of two or three minutes to look at the Olympic charter and realize that they were in violation of their own charter just by the rules they created.

“We don’t think they did it on purpose – but we were just trying to bring it forward to them so they had an opportunity to rectify it,” she said.

Bujold added that she was “a little surprised” to have not heard back from the IOC, adding that she knows through other channels that the letter has been received and that the committee is aware of the issue. While other athletes have reached out about “different situations and different scenarios” from this event being cancelled, Bujold said there are some who have received some sort of reply, but not her.

“I don’t know if it’s because there’s legal representation involved… but hopefully we hear in the next few days.”

When asked what she’d like to see changed with the qualification rules, Bujold said she and her legal representation have asked the IOC to consider her rankings before her leave for maternity, arguing that it would be very much in line with ‘the corporate world’ when a woman leaves her job and returns to the same role post-maternity leave.

“I know the World Tennis Association has done that,” said Bujold. “We’re hoping that they can look this and realize it’s the smart thing to do – not only for me, but for all the athletes who will be in my position at some point in the future.”

As the Tokyo Olympics draw closer, Bujold said it’s been increasingly difficult to stay hopeful that she’ll be able to compete. With that Monday response deadline from the IOC rapidly approaching as well, Bujold said her lawyer’s legal team will have to begin the process of getting started to enter arbitration, even if it’s an option she’d prefer not to have to pursue.

“I know her team is working on it now to have things ready to go but obviously we don’t want it to come to this." said Bujold. “This is not at all the fight I want to be in - I want to be in the ring fighting, not doing this type of thing.”