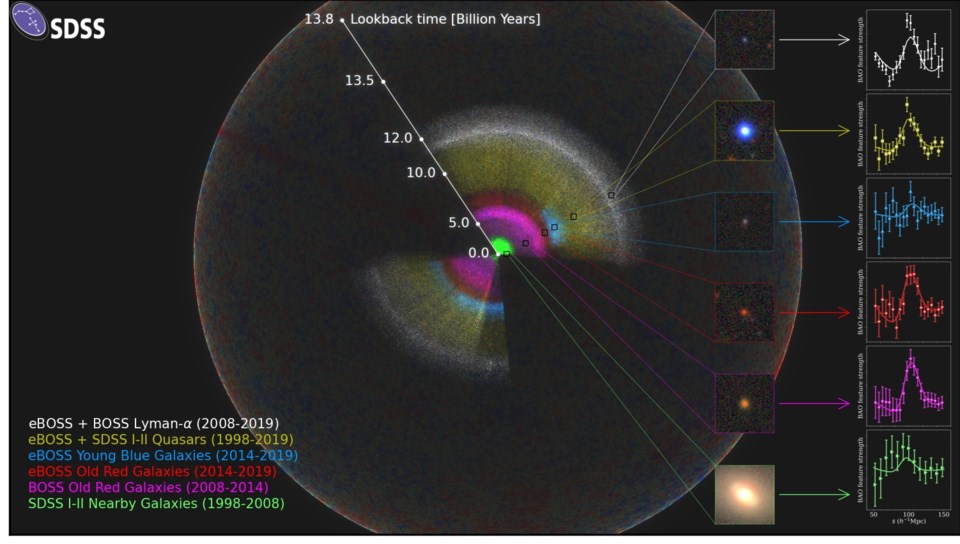 It's the largest look at our universe ever, and a University of Waterloo professor helped to lead the charge in its creation.

The Sloan Digital Sky Survey is a compilation of surveys over the last 20 years using the Sloan Foundation telescope, and the work spans some 11-billion years of cosmic history.

"What we do is we take the positions of galaxies in the universe," says Will Percival, an astrophysics professor at UW, and a lead researcher on this work, "Each galaxy really highlights a part of the universe that contains a concentration of mass."

"By taking the three-dimensional positions of a billion of these galaxies, we can build up a map of where the masses (are) in the universe."

For Percival, it's 15 years in the making.  He was tasked with ensuring the scientific rigor of the results put together by the eBOSS management team.

The results revealed filaments and voids, starting when the universe was only about 300,000 years old.

"The analogy for the world would be if we had a map, for example, of Canada," Percival explained, "But that map just contained locations of the tops of the mountains.  You would still be able to infer something about Canada from that map."

"It wouldn't be quite as good as a road map or something else, but it would still be a map that you could use."

The hope is to use the information gained to get a better understanding of this period of time in our universe.

Regional Police respond to vehicle roll-over in Wellesley Township
Sep 27, 2020 2:30 PM
Comments
We welcome your feedback and encourage you to share your thoughts. We ask that you be respectful of others and their points of view, refrain from personal attacks and stay on topic. To learn about our commenting policies and how we moderate, please read our Community Guidelines.