Scott Shewfelt, formerly of Tavistock and Waterloo-Oxford, lost in his third episode and the debut of guest host Aaron Rodgers of the Green Bay Packers
Apr 6, 2021 6:45 AM By: Mark Pare 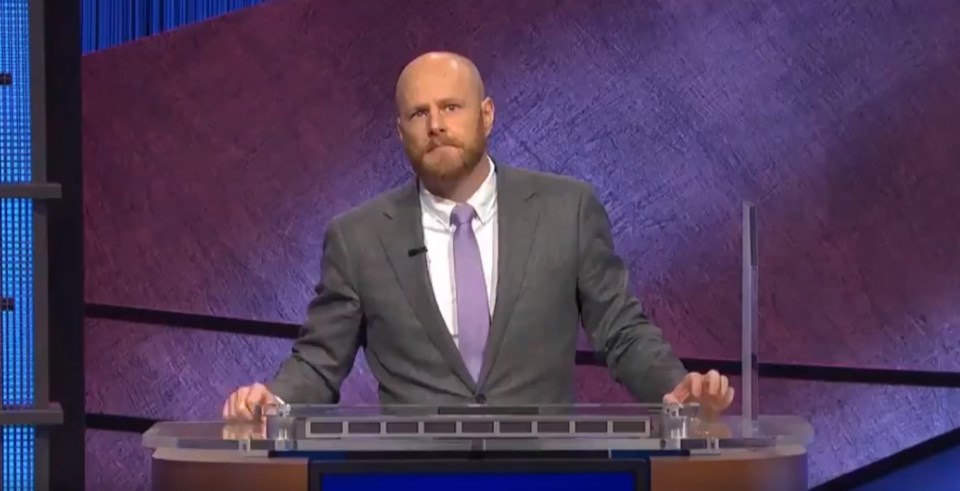 Screenshot of Scott Shewfelt, formerly of Tavistock and Waterloo-Oxford, participating on the TV show Jeopardy.

Scott Shewfelt saw an opportunity, and he took it.

Shewfelt, formerly of Tavistock and Waterloo-Oxford, came short in his third episode of Jeopardy, but not without bringing up a recent painful memory for guest host, Green Bay Packers quarterback Aaron Rodgers.

With no hope of winning the game, Shewfelt instead used Final Jeopardy to ask Rodgers "who wanted to kick that field goal?"

The field goal in question referred to the NFC Championship game between the Packers and Tampa Bay Buccaneers in January.

On fourth and goal from the six-yard line, and 2:09 to go --- and Green Bay down by eight points --- Packers head coach Matt LaFleur decided to go for three points instead of allowing Rodgers to try for a touchdown and two-point conversion to potentially tie the game.

Rodgers took the comment with a laugh and a smile, responding "that is a great question, should be correct but unfortunately for this game today, that's incorrect."

Shewfelt wagered nothing, but he comes away as a two-time Jeopardy champion and just over $48,000 in winnings.

And a moment Rodgers will not forget, saying Shewfelt "will always be all time in my book, my friend."

It was Rodgers' debut in the guest host position.