The 'Treat Accessibly program,' which is being promoted by organizations like the Rick Hansen Institute, is ensuring every child can enjoy Halloween
Oct 26, 2019 5:07 PM By: Ariel Deutschmann 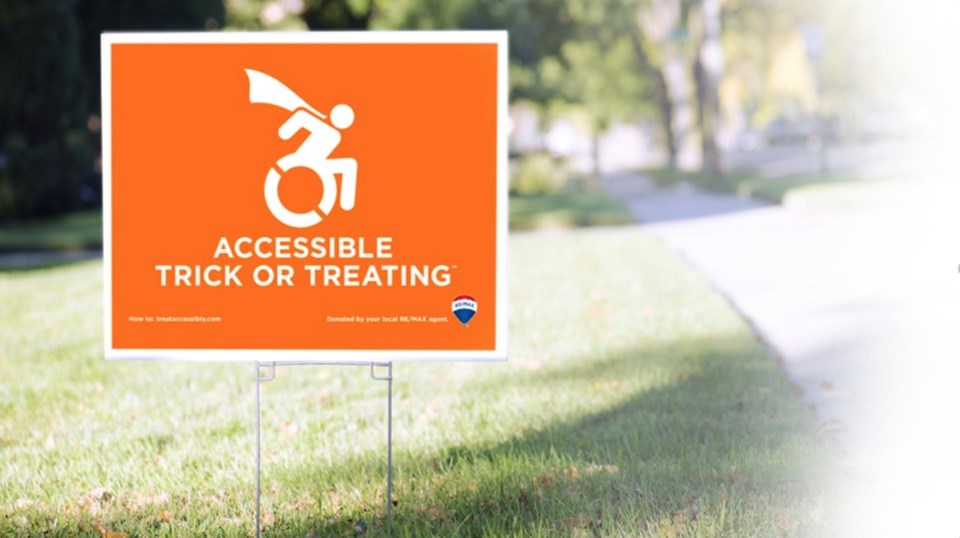 Photo of an accessible trick or treating sign from the Treat Accessibly program.

It's not a trick if you see an orange sign in front of homes this Halloween.

The sign is part of a inclusive program called 'Treat Accessibly.'

Founder of Treat Accessibly, Rich Padulo, says the program aims give every kid the opportunity to go trick or treating.

"Our goal is to ensure every child is able to enjoy Halloween with their friends and not be excluded in any way. " says Padulo.

By putting a sign on your lawn, homeowners can let nearby families know their home can accommodate for children with mobility issues.

"There's some very strong fringe benefits to being outside and participating instead of just a knock at the door." says Padulo, "We're showing not telling our children about being aware of other people's needs. "

Padulo says the program began in 2017 when he was putting pumpkins on his front porch and saw a little boy using a wheelchair on a family walk.

As they were walking, Padulo says he realized the boy would not be able to trick-or-treat at his home due to the stairs and something clicked.

"What challenged me to create the Treat Accessibly program is that I am a Dad, and I can imagine if my own daughter had an mobility issue and how Halloween would be seen through her eyes." says Padulo.

"And that's basically what happened. I saw what Halloween was like in that little boy's eyes and that just inspired change."

Padulo asked a friend to make him a sign, which depicts a flowing cape behind the wheelchair symbol, and he put it on his lawn.

After putting up the sign, five families visited the Padulo residence on Halloween, all saying they stopped by because they had seen the sign.

Their reactions was enough to push Padulo to keep going with the program.

"When you get a hug from a mom whose child gets to experience Halloween with her friends, that's quite empowering. " says Padulo.

In 2018, 2,500 homes across Ontario had a Treat Accessibly sign on their lawn, thanks to the help of RE/MAX Canada.

"They stepped in and offered to print 2,500 signs and distributed them across Ontario," says Padulo, "and that started to get buzz and coverage for the program."

This year, Padulo says there could be over 20,000 houses across Canada with a sign out on their lawn.

When it comes to homes in Waterloo Region, Padulo says the community has been shown great interest for the program.

"Waterloo is like every other municipality in this where I've received support." says Padulo, "It's really about passing partisan and non partisan lines and everyone's really coming together on this, and it's very inspiring."

With Halloween coming up, there is still time for interested residents to get involved and spread the word.

"The key is to let people know in your area, as far in advance to Halloween as possible, to let neighbours know that your home is going to be accessible home for mobility issues. " says Padulo.

Other ways to help include setting up in front a 'spooktacular' station in front of their garage or the end of their driveway.

Treat Accessibly signs are available at Home Depot locations across Canada, or online at treataccessibly.com.

Padulo says with the continuing success and community involvement, he hopes to take his initiative into Quebec and beyond Canadian borders.

"My goal would be fully across Canada into French Canada next year, and if not, going into the U.S." says Padulo, "I think there's been nothing more inspiring than seeing the response from people and the positive response."