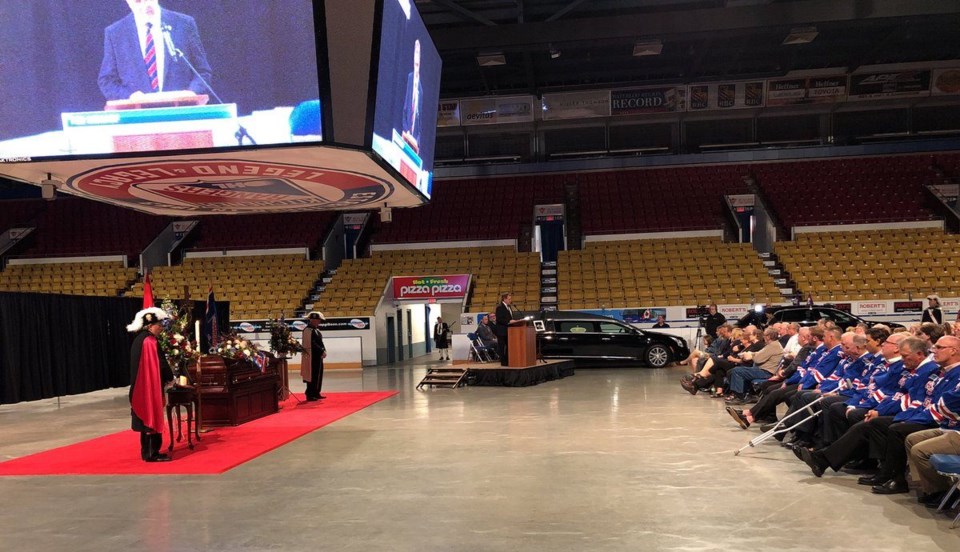 Hundreds of people attended the memorial for Don Cameron at the Kitchener Aud. on Thursday. (Photo: Caryn Ceolin/KitchenerToday.com)

The Kitchener Memorial Auditorium was sombre, as hundreds of mourners said their final goodbyes to the late, great Don Cameron.

The legendary Kitchener Rangers play-by-play announcer was remembered by the community at a public visitation and remembrance ceremony on Thursday.

Cameron lay in an open casket at centre ice, as a piper played from the booth where Cameron spent 50 years of his life calling more than 4,000 games for the East Avenue Blue.

In a touching tribute to the man who spent over half a century behind the mic for the Rangers, a piper will play from the booth Don Cameron's legacy was built. pic.twitter.com/O4GyhuY4e5

"I remember Don's first broadcast on the radio when I was a kid, I was about 10 or 11," says longtime listener Pete. "I remember years ago working at Schneiders and we'd listen to the broadcast on Friday night all the time ... It was his excitement in the broadcast, and he just painted a picture better than anybody else."

Retired NHL player Rod Seiling was the first public visitors in line to pay his respects. He says Cameron's legacy will live on forever through the boys in blue.

"The Rangers were his passion and he lived it everyday in the broadcast booth," says Seiling, who adds he's known Cameron since his minor hockey days. "He stayed out of the limelight so here's a way for all of us to say thank you Don."

Cameron’s nephews and niece say a few words. They thank the community on behalf of Cameron’s wife Carole and the entire Cameron family for sharing their grief and remembering the man they say they were privileged to call their uncle. pic.twitter.com/bnWpzZTwxz

Memories were mixed with tears, as generations of fans listened to stories of the man affectionately remembered as 'The Legend.'

Scharf, former president of the Rangers, recalls being a player on the team, and says even when they lacked on the ice, Cameron made the fans feel like they were still worth coming out to see.

"For Don, he was like a favourite uncle to us all," Scharf says. Farwell recalled his favourite stories of Cameron -- like the time he needed 14 stitches to close a gash in his head after a fall at The Aud, and he still called that game.

Cameron was a great broadcaster, Farwell says, but an even better human.

The Knights of Columbus form an honour guard as Cameron is piped out of The Aud. Members of the @OHLRangers serve has honourary pallbearers. pic.twitter.com/8BCNFbVNfl

Soft cries could be heard from the crowd as Cameron's casket was closed, and carried away by members of the Rangers serving as honourary pallbearers.

The Knights of Columbus formed an honour guard as Cameron's body left The Aud one final time.

A private funeral is to be held on Friday.