The Rangers captain was back, after serving a five-game suspension, and led the team offensively against Windsor
Mar 9, 2020 5:35 AM By: KitchenerToday Staff 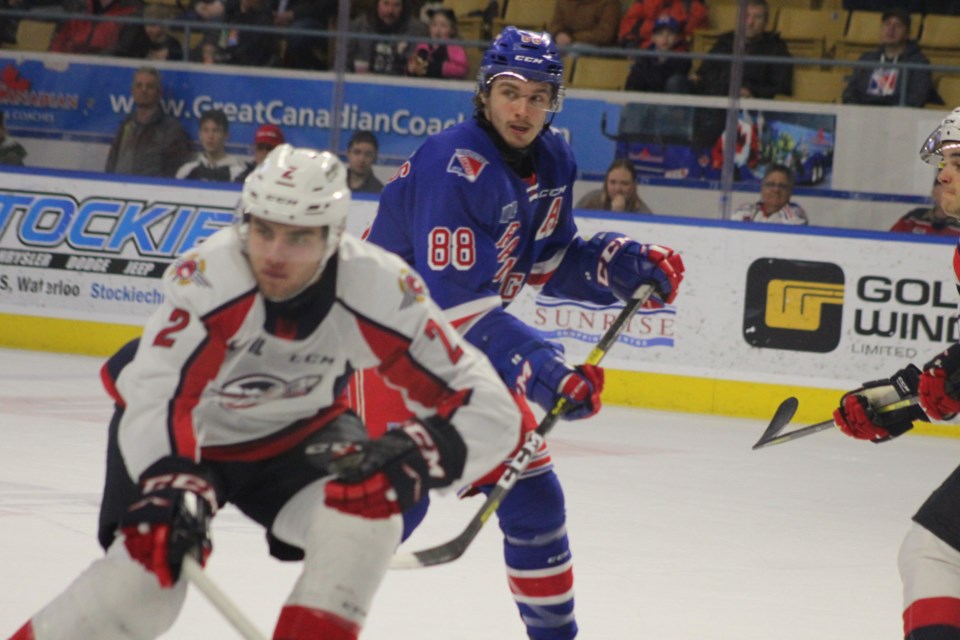 With the lights shining brightly on the Kitchener Rangers, so to, did their captain.

Greg Meireles made his return to the Rangers line-up in time for the teams first game of the season on a nationally televised broadcast on Sportsnet.

He had a goal and an assist, and Kitchener clipped the Windsor Spitfires 3-2, in the border city.

Head coach Mike McKenzie was happy to have his captain back at his disposal.

"That's an understatement," said the bench boss. "He's a guy that drives play for us, he plays both ends of the rink, he's so explosive, plays hard and competes every shift. We were definitely lacking something when he wasn't with us."

The game was tied at two late in the third period, before Windsor took two straight penalties, giving the Rangers a 5-on-3.

Axel Bergkvist came off the goal line and went far-side-shelf on Xavier Media to give the Rangers the lead with just 43 seconds left.

While the powerplay hasn't been as lethal as it was last season, Meireles pointed to a small change ahead of his return.

"I'm in the middle now, and [Hawel] is on the wall," said the captain. "It worked today, so hopefully that change makes our power play better going until the end of the year."

Greg started the game on a line with sophomore Reid Valade and rookie Declan McDonnell, after McKenzie shuffled up his pairings before the game.

"Change things up. Give us a little bit more depth," said McKenzie about the reasoning behind the shuffle. "We're a tougher team to play against if we have three really solid lines with some more depth there."

The Rangers will have another potential first-round match-up when they travel to Guelph Wednesday night to face the Storm.

Waterloo Region sees increase in 20 new COVID-19 cases
Oct 24, 2020 1:35 PM
Comments
We welcome your feedback and encourage you to share your thoughts. We ask that you be respectful of others and their points of view, refrain from personal attacks and stay on topic. To learn about our commenting policies and how we moderate, please read our Community Guidelines.