There's also been reports of defaced candidate signs in Cambridge and Guelph
Oct 8, 2019 7:00 AM By: Cali Doran 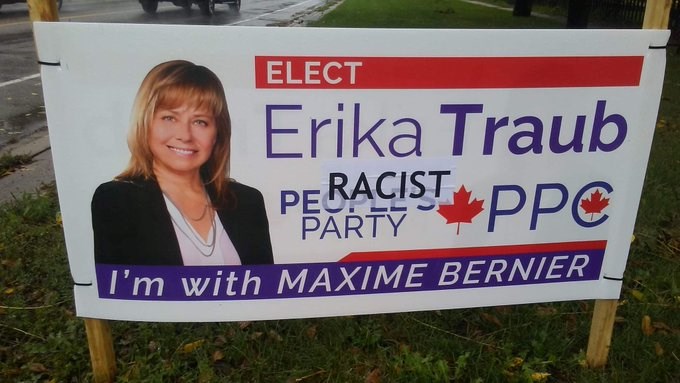 With less than two weeks to go until the election, it seems there are vandals targeting some candidates' signs.

Erika Traub is the People's Party candidate for Waterloo, and said a sticker with the word 'racist' was put on two of her signs.

"I was shocked... this really kicked me in the stomach, [for me] I think it was the equivalent of getting pushed down a flight of stairs, because it was so offensive to my sense of justice and for me what the party stands for."

She said this also affects her creditability.

"It is a lie, it runs contrary to everything I stand for. I have been in the courts for 30 years fighting for justice and this sort of thing is not tolerated. It's an attack on character, it's a really deep attack on the character of myself and my party, and it is a lie."

Meantime, there is word that signs for a Liberal candidate in Cambridge were defaced last week.

A number of Christian Heritage party signs in Guelph were also targeted over the weekend. Swastikas were spray painted on several of Gordon Truscott's campaign signs.

While Waterloo Regional Police haven't received any reports of signs being vandalized, there have been some reported thefts - including in the Hespeler Road area of Cambridge last month.