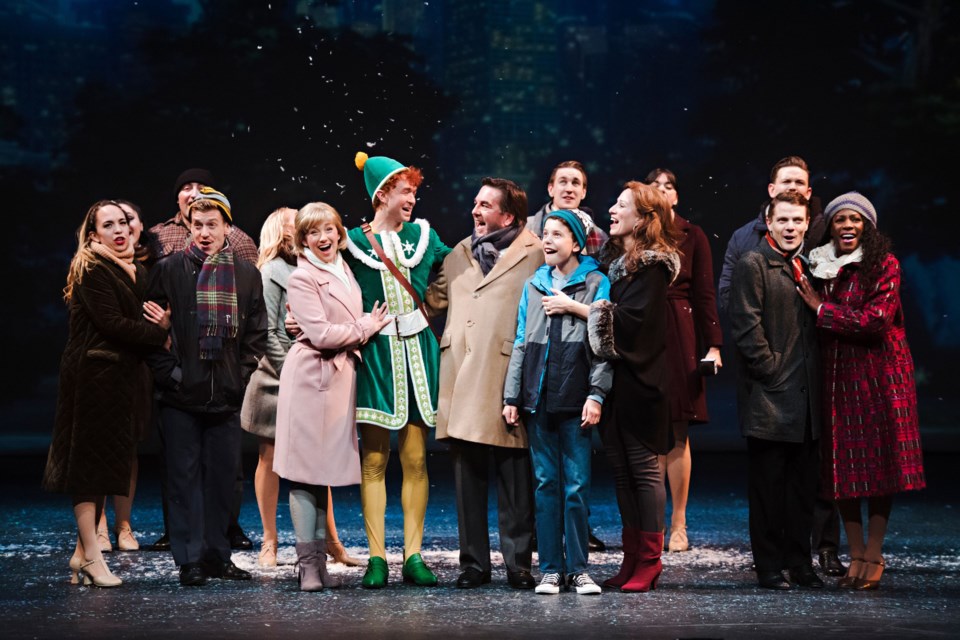 Tim Porter (centre) and the cast on stage during Elf: The Musical. Photo supplied by Drayton Entertainment.

Just in time for the holidays, Drayton Entertainment has announced Elf: The Musical will be performing in Waterloo Region.

Drayton says the family-friendly musical will run this year at the Hamilton Family Theatre Cambridge from Nov. 20th to Dec. 29th.

Elf is the story of one of Santa's helpers named Buddy, who goes on a journey of self-discovery after he questions if he really is an elf based on his enormous size and poor toy making abilities.

The story is considered by some to be 'one of the greatest Christmas movies ever made' after new Line Cinema introduced the film in theatres in 2003.

Tim Porter, the actor who plays Buddy in the musical, says he knew right away he wanted to audition for the role.

"I loved the movie, I love Will Ferrell." says Porter, "The script is very fun and great. I empathize with the character a lot. I feel quite similar to Buddy. I'm a happy-go-lucky kind of guy and was very naive as a young person."

According to Porter, when he found out he got the role he was overjoyed.

Once the cast was selected, they only had three weeks to rehearse before opening night. Several members had been part of a different production of Elf at the Aquarius Theatre last fall.

While he loves all the musical numbers in Elf, Porter says he enjoys performing songs like 'Just Like Him' and 'Nobody Cares About Santa,' which is performed in the second half of the show.

"It's me with a bunch of Santa's and we do a tap dance." says Porter, talking about the song Nobody Cares About Santa. "It's more of a jazzy, really nitty-gritty performance."

While the actor has played diverse roles in past performances of Snow White and Jack in the Beanstalk, he says playing Buddy was more fun than challenging.

"I think just because he's such a joyful character, and he's so full of love and so honest, it just makes it really easy and fun." says Porter.

"I just took the character for what it was in the script." says Porter, "Me and the director [Michael Lichtefeld] both agree the goal was to be honest."

Porter says he has worked with Drayton for eight seasons and enjoys working with the theatre company and their artistic director, Alex Mustakas.

"I've toured all over North America and there's no other company that rivals the family environment of this company. It's fantastic." says Porter, "And I love working with Alex. He's a brilliant man and there's so much you can learn from him. "

"In a time when a lot of Canadian musical theatres are shutting down, he just continues to grow and grow."

Residents who plan on seeing Elf: the Musical can expect a festive evening, according to Porter.

"The whole show is really fun and every song is fun to perform." says Porter, "It's just a great two hours."

With a talented cast and crew who have come from New York and Scarborough for this production, Porter says residents are getting a good deal.

"It's a remarkable group of people and definitely worth the price of admission. " says Porter, "We have the best of the best in Canadian talent."

For more information about the musical and other performances, go to draytonentertainment.com.