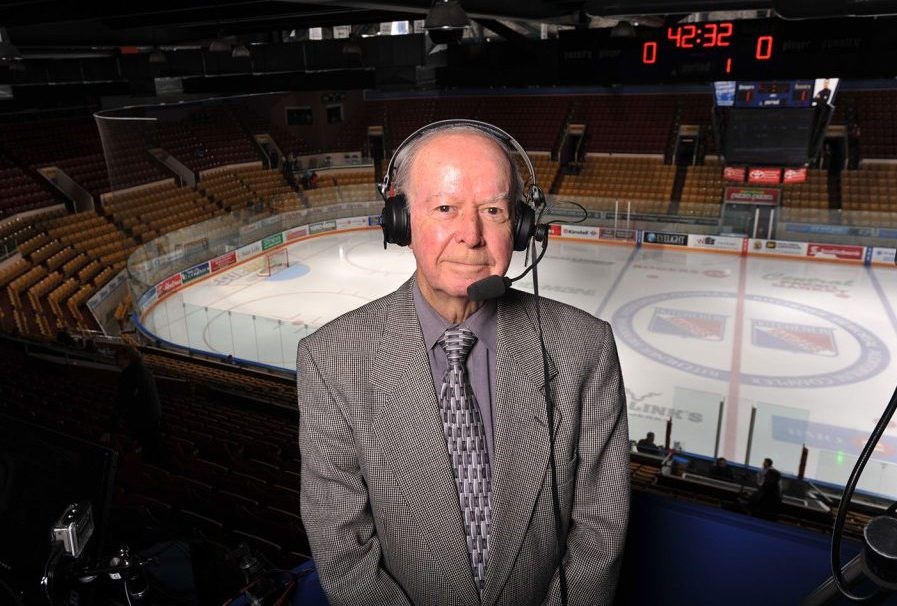 Photo from the Kitchener Rangers.

After spending more than half a century calling over 4,000 games for the Kitchener Rangers, it’s time to say goodbye to Don Cameron.

The community is invited to pay their final tributes to the legendary Kitchener Rangers play-by-play announcer today at the Kitchener Memorial Auditorium.

Past president of the Kitchener Rangers, Craig Campbell says although he may be gone, the legacy Don leaves behind will live on forever.

“It will take some time not seeing him around the rink that’s for sure,” says Campbell. “He’s a staple at the Auditorium, whether it be in the broadcast booth in the corner, or just around.”

A public visitation begins at 4 p.m., everyone is encouraged to bring a bag of potatoes, or make a donation to the House of Friendship.

“That tells you about the legacy of Don Cameron,” says Campbell. “He went out of his way for a lot of people, and I think people are now returning the favour.”

A ceremony of remembrance will begin at 8:30 p.m. with emotional tributes by 570’s Mike Farwell and Gary Doyle, who will emcee the ceremony.

Current and former Rangers players will serve as pallbearers, placing his casket at centre ice.

Patrick Schlitt, Funeral Director at Erb and Good Family Funeral Home says “he would have hated this, we all know that, but people need a chance to say goodbye.”

Don passed away on June 7 after a brief illness.

“He was a very humble man who did a lot for the community and he would say he didn’t,” says Schlitt. “When you’re humble about things, I think you affect more people.”

If you cannot attend tonight’s ceremony, you can watch live on Rogers TV.

The Knights of Columbus will form an honour guard as Don is lead out of the Aud – one last time.

A private family-only funeral will be held Friday.