A look at the foods often served during Hanukah, Juleaften, Christmas, and Kwanzaa
Dec 17, 2019 1:45 PM By: Jasmine Mangalaseril 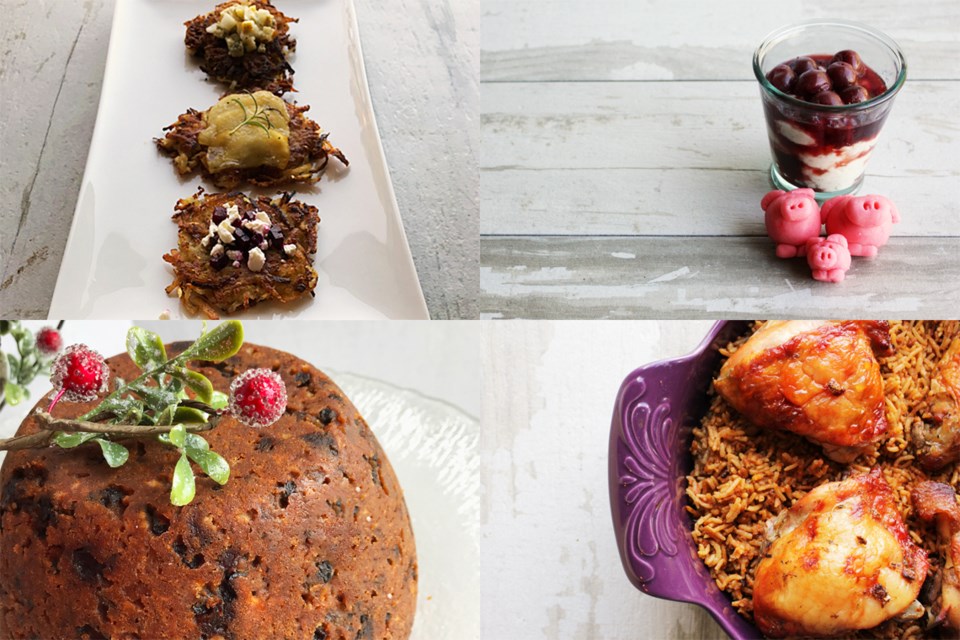 It seems wherever you are in the world, the holiday season focuses on food, friends, and family. Each of the host of celebrations has their own traditions, including foods and flavours that have been passed down through the generations. Here’s a look at Hanukah, Juleaften, Christmas, and Kwanzaa, and the foods often served.

Latkes for Hanukah (December 22-30, 2019)
The Jewish Festival of Lights is an eight-day celebration of hope and freedom, after the Maccabean Revolt. During the rededication of Jerusalem’s Holy Temple, only one day’s worth of oil was available, but the menorah burned for eight. This is now known as the miracle of the oil.

During each night of Hanukah, candles are lit, and prayers are said. There’s often one evening when family and friends will gather, play the dreidel game, and have a communal supper. The regional foods served are symbolic of the oil: Colombian patacones (fried plantains), Spanish keftes de prasa (leek fritters), Israeli sufganiyot (jelly-filled doughnuts). With many of Canada’s Jewish population originating from Eastern Europe, latkes are often served - warm potato fritters topped with an almost unending combination of flavours. Try my latke recipe.

Risalamande is a rich rice pudding topped with warmed tart cherry sauce. Before taken to the table, an almond is hidden in the bowl; whoever finds it receives a prize, often a marzipan pig. The pudding is also a favourite food of the Nisse, mischievous creatures who live in the pantry or barn. Leaving them some pudding will ensure, they cause havoc like sour the milk or rot the crops. Try Kristine Mathers' (of The Danish Place) recipe for risalamande.

Christmas Pudding for Christmas (December 25, 2019)
While a lot of us tuck into a turkey dinner with all the trimmings on Christmas Day, many keep the traditions brought with parents or grandparents. Those from Southern Italy partake in the Feast of the Seven Fishes. Ethiopian Orthodox Christians will have chicken doro wat (chicken stew) with injera (teff flatbread) following their 40-day fast where they eat only one vegan meal a day.  In France, le Réveillon features oysters, caviar, chestnut-stuffed turkey, finishing with the Thirteen Desserts representing Christ and his apostles.

In England, a flaming Christmas pudding often appears at dessert. Traditionally mixed and steamed on Stir-up Sunday (the Sunday before the first Sunday of Advent), it cures until Christmas Day.  Some include charms in the pudding, to foretell the finder's coming year, Try this recipe for Christmas pudding.

On the sixth night (December 31st) a Karamu (an African feast) is held. The table is laid with symbolic foods representing the harvest's bounty, an ear of corn for each child still at home, a communal chalice, gifts, and the kinara. What's served differs from family to family and can come from any point of the African diaspora, including the Caribbean, southern US, and West Africa. Try this recipe for Ghanaian jollof.

63 new cases of COVID added to region
Nov 23, 2020 1:42 PM
Comments
We welcome your feedback and encourage you to share your thoughts. We ask that you be respectful of others and their points of view, refrain from personal attacks and stay on topic. To learn about our commenting policies and how we moderate, please read our Community Guidelines.

About the Author: Jasmine Mangalaseril

Jasmine is a food writer focusing on people, cultures, and cuisines.
Read more