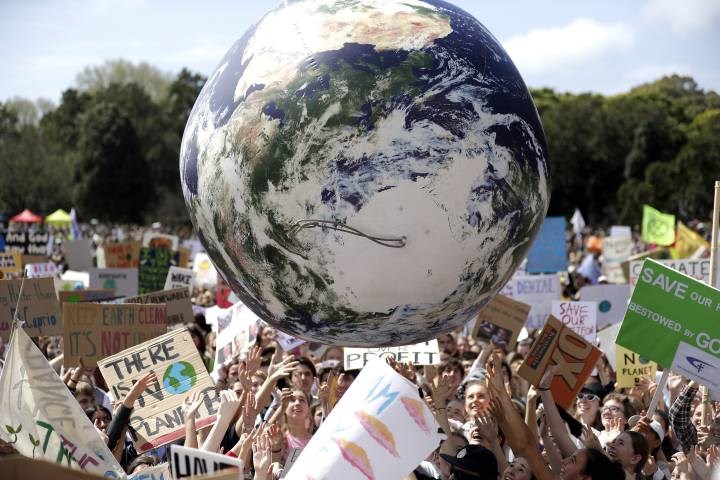 Thousands of protesters, many of them school students, gather in Sydney, Friday, Sept. 20, 2019 (AP/Rick Rycroft)

Climate change and the environment continue to be hot topics in the 2019 federal election.

Local candidates will have their chance to touch on the subject through the national initiative '100 Debates on the Environment'.

That includes one at the New Dundee Community Centre on Wednesday night, hosted by the Nith Valley Ecoboosters.

Organizer Betsey Daub said the debate is for candidates running for the Kitchener-Conestoga riding.

"We have four out of five candidates attending. Harold Albrecht, the incumbent, is unable to attend due to a volunteer appreciation event. We are quite disappointed that he's unable to come."

"They're not just on climate change - also on land issues, water issues, things like that .. a number of things that are important in terms of environmental issues. The candidates have those four questions and they will have the opportunity to prepare their answers."

Daub said they'll also be taking questions from the audience.

"Instead of people coming up to microphone which can take some time, we're going to have people submit their questions and then the moderator will ask them. Those questions clearly won't be given to the candidates ahead of time, because those will be generated by the audience. We also have several questions from those in the community."

There will also be a debate at the University of Waterloo's Theatre of the Arts on Wednesday night.

It’s hosted by The Department of Political Science, and will feature candidates running in Waterloo.

Conservative Jerry Zhang is unable to attend due to a scheduling change.

That event is sold out, but you can check it out via livestream starting at 7 p.m.

City of Kitchener announces more public pools reopening
Aug 8, 2020 11:00 AM
Comments
We welcome your feedback and encourage you to share your thoughts. We ask that you be respectful of others and their points of view, refrain from personal attacks and stay on topic. To learn about our commenting policies and how we moderate, please read our Community Guidelines.