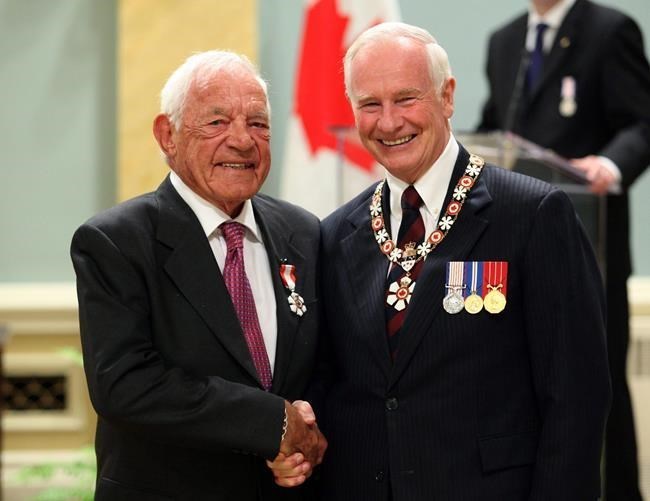 Photo by The Canadian Press

Howie Meeker, who went from Stanley Cup-winner to Canadian hockey icon as a colourful TV hockey analyst who wore his heart on his sleeve, has died. He was 97.

A spokesman for the Toronto Maple Leafs confirmed via email that Meeker died on Sunday. There was no immediate word on the cause of death.

Different generations had different memories of Meeker, but almost all involved hockey. He played it, talked about it and taught it.

The Maple Leafs said Meeker had been their oldest alumnus. He was given a standing ovation Sept. 15, 2019, when he attended a team alumni game in St. John's, N.L.

As an NHL player, Meeker won the Calder Trophy as the top rookie in 1947 — the same year Gordie Howe entered the league — and went on to play in three all-star games and hoist four Stanley Cups in eight seasons with the Maple Leafs.

Most famously, he passed the puck to Bill Barilko for the 1951 Cup overtime winner against Montreal.

Amazingly the winger spent two years as a Progressive Conservative member of Parliament while playing for the Leafs.

In June 1951 he won a byelection in the riding of Waterloo South. He did not run in the August 1953 federal election.

Meeker replaced King Clancy as coach of the Maple Leafs in April 1956. He went 21-34-15 in his one season behind the bench before moving upstairs to become GM the next season.

While Meeker's NHL playing career was over at 30 after 346 games — with 83 goals, 102 assists and 329 penalty minutes — he continued to play pro hockey on and off for another 15 years at a variety of levels including the American Hockey League and Newfoundland Senior League, among others.

He retired from playing after the 1968-69 campaign and kept skating into his 80s.

Meeker remained indelibly linked to hockey via the broadcast booth. He was honoured by the Hockey Hall of Fame in 1998 with the Foster Hewitt Memorial Award after a 30-year career on CBC and TSN.

"Howie was Howie. And he set the bar, no question about it," fellow "Hockey Night in Canada" commentator Dick Irvin once said.

Meeker, oft clad in a CBC powder blue jacket, was hard to miss. He was the Don Cherry of his time, although he kept his focus on hockey.

His enthusiasm was straight from the heart, with "Golly gee willikers" and "Stop it right there" some of his trademark sayings during his video analysis.

Meeker's excitement level often was like that of a child on a sugar high, but he knew his stuff having played and coached. He also ran hockey schools for more than 30 years and literally wrote the book on hockey — 1973's "Howie Meeker's Hockey Basics."

During the '70s, he offered up drills and tips during his "Howie Meeker Hockey School" sessions on CBC.

He later wrote another book called "Golly Gee — It's Me: The Howie Meeker Story." And he never ran short of opinions on how to improve the game he loved.

In 2010, Meeker was inducted into the Order of Canada.

"I've had a marvellous kick at the cat," he said at the time.

He was inducted into the Ontario Sports Hall of Fame the same year.

Born in Kitchener, Ont., Meeker's childhood entree into hockey was helped by the fact that his father had a Coca-Cola route that employed several NHL players during the summer.

He grew up a Leafs fan but always had a soft spot for the Rangers thanks to Heller.

Meeker played junior hockey for the Stratford Kroehlers and the Brantford Lions before serving in the Second World War during which he was badly injured by a grenade in training.

"I was very lucky to get out of that with as little damage to my leg as what happened, but it blew me up about eight feet," he recalled.

He missed D-Day because of that.

"A lot of my very close friends didn't come back," he told Leafs Insider.

He recovered and returned to hockey with the Stratford Indians of the OHA Senior A in the 1945-46 season.

He also tied the league record for most goals in one game by a rookie when he scored five times in a 10-4 win over Chicago on Jan. 8, 1947.

Meeker had four goals and four assists in the ensuing playoffs as the Leafs defeated the Montreal Canadiens in the final.

In a 2010 TV interview, he said that first Stanley Cup was the most memorable.

"Never thinking that you're ever going to be lucky enough to get to the Toronto Maple Leafs, you get there and you win a Stanley Cup in your first year, yahoo!"

Toronto also won Cups in 1948, '49 and '51. During his playing days with the Maple Leafs, the five-foot-nine 165-pound Meeker was a member of the "Tricky Trio" line with Ted Kennedy and Vic Lynn.

Whatever his age, Meeker had some advice to give.

In 2015, when he received an honorary doctor of laws at Memorial University's convocation, he told the students that it was 20 years living in Newfoundland — he left in the mid-70s — that taught him balance in life was essential.

"I hope you young ladies and gentleman have learned how to live by living here in St. John's or in Newfoundland. Take it with you. Because all work and no play is not very good," Meeker said to applause.

Meeker followed his own advice.

"If I had been born a multi-millionaire, I’d have paid someone to do what I've done all my life," he said in a 2013 CBC interview.

Meeker had six children with his first wife Grace — they were married for 55 years before she died of cancer. He remarried, living with wife Leah in Parksville on Vancouver Island where they were active in fundraising for the B.C. Guide Dog Services.

The Maple Leafs said in a statement that a memorial will be held in New Hamburg at a later date.

With files from Neil Davidson - The Canadian Press