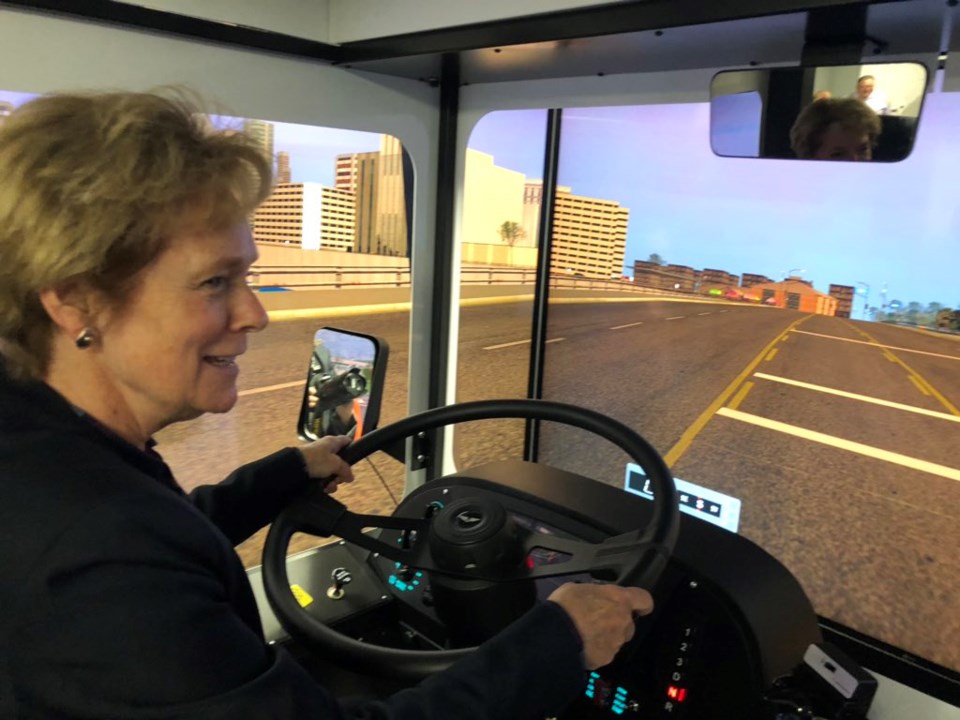 Regional Chair Karen Redman tries out the new GRT bus operator simulator. Officials are hoping it will be a more efficient way to train new bus drivers on all road conditions. Aastha Shetty/KitchenerToday

The Region of Waterloo has ushered in a new era of training for GRT bus drivers – using a driving simulator.

So far, the bus simulation prototype only features generic roads, but officials are working on new updates to mimic real-life local roads.

The Region’s director of transit services, Peter Zinck, says the bus simulator is only one of many other tests already in place to ensure drivers are ready for the real thing.

“For a G-class licence driver, we would send them off to a contracted training service and they’d get their BZ-class licence there, and then they’d come back here and we’d train them on how to drive in a GRT environment here. So that’s all about how we serve customers, safety processes, reporting processes, so they go through all of that here, before going to drive real bus routes in the city.”

He says two classes are currently using the new tech as a part of their training.

“It’s an opportunity to use this tool to enhance skills early on. So that’s doing it in a risk-free area, and you can learn different practices for example, if you’re training in the summer, some of our new trainees won’t get experience with snow when they’re driving a regular bus, but we can turn on snow with this device.”

The bus is moving! @570NEWS pic.twitter.com/qA8b8TQerL

“We also have, under development, virtual scenarios which are designed around the Region of Waterloo’s roadways. About 100kms of roadways are being digitized and mapped out so that we will be driving in day-to-day environments that are typical to see for an operator. That’s an additional $600,000 of development work that goes into this. We don’t have that yet.”

The second update that mimics real roads in Waterloo Region will be ready to install within a year.

The simulator can also be used to train drivers on how to act during emergency situations, such as using the bus as a shelter for victims during a fire, or when a sudden detour is needed.

Zinck says opening the simulator to the public to try out is a work in progress.

There’s a “rabbit station” here as well. Instructors can use it to drive a smaller vehicle near the simulated bus. This is to test scenarios where the bus driver may be cut off, or too closely followed by another vehicle. @570NEWS pic.twitter.com/mOByuoYkPO