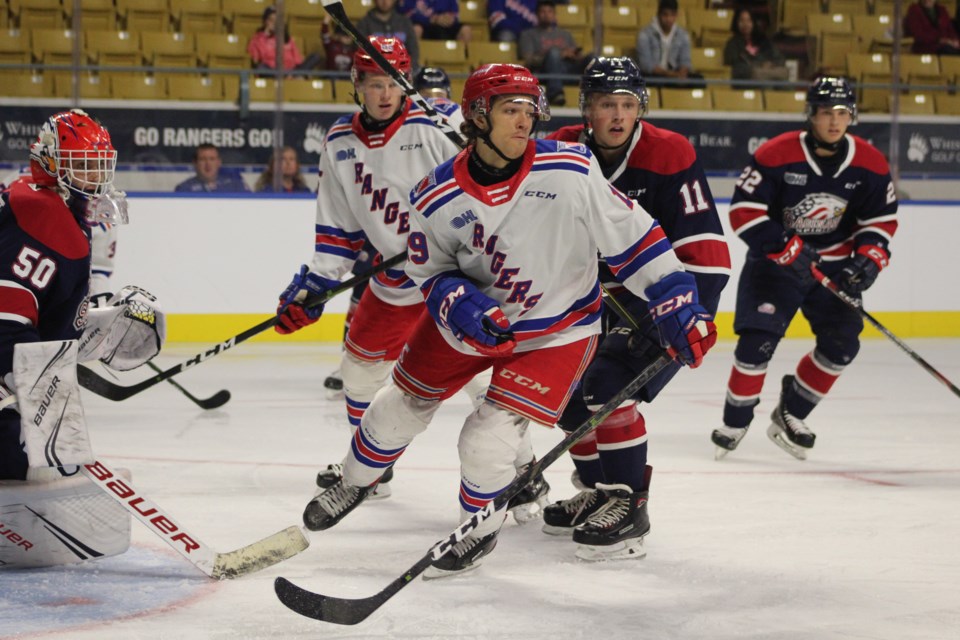 His work wasn’t done though. He had plenty of media to visit. After all, the Cambridge-native notched his first multi-goal game in the Ontario Hockey League.

His two goals led the way for the Rangers, who stopped the Sarnia Sting 7-3, Friday at The Aud.

“The legs are sore,” said a smiling-Serpa post-game. “I’m still trying to catch my breath.”

That’s because interim head coach Mike McKenzie kept sending him over the boards in the third period, in hopes of sending the hats soaring on East Ave.

“All through the third [the guys were] going out there and looking for me, trying to get me the third one,” laughed Serpa drawing attention to his, now, 14 points on the season. “It’s always exciting when a guy steps up and does a little bit more than usual.”

So, McKenzie, how much ice did Serpa see in the third period?

On a Rangers power play in the third period – with a four-goal lead – some fans were yelling, “Shoot!”

Technical difficulties to start the National Anthem, but the crowd helps out Cyndi Jones before staff bring her another microphone #OHLRangers #OHL pic.twitter.com/2DLMUAuWMR

Serpa opened the scoring for the Rangers, picking up a rebound in the slot and fired the puck passed a flopping Ethan Langevin.

“We did some video, and executed what we were looking at well,” said Serpa. “I popped out, after Isaac [Langdon] got a shot, and I put it home. It was early in the game, so I threw down a big "celly" to get the boys going.”

You could say, “the boys” didn’t get going until the second period. It was tied 3-3 after 20 minutes.

Serron Noel led the way offensively for the Rangers, with four primary assists. That makes it 10 points over his last five games.

McKenzie knows he’s taken his game to another level since coming back from missing five games because of an injury.

“Some guys can jump in right away and be comfortable and other guys it takes a little bit of time,” said the head coach. “Ever since he’s been back from his injury, he’s definitely looked more confident and he’s playing with a bit of an edge. It’s great to see he’s been great for us.”

Noel has found himself on a line with co-captain Riley Damiani and Jonathan Yantsis.

Yantis had two goals – his 36th and 37th on the year – while adding an assist.

The Rangers brave the elements Saturday when they travel to Owen Sound to face the Attack.