Jacob Ingham and Nico Daws proved to be as advertised, but Kitchener extends win streak to three games
0
Dec 1, 2019 5:41 PM By: Mark Pare 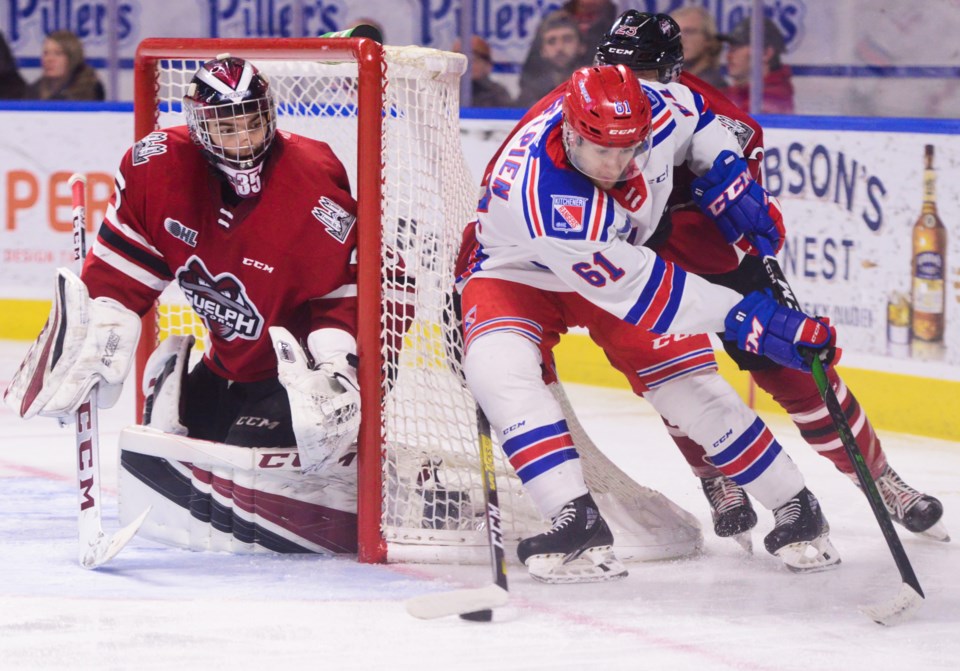 Kitchener’s interim head coach Mike McKenzie, along with many others that braved the freezing rain to pack The Aud, were left speechless by a late-game save from Kitchener Rangers goaltender Jacob Ingham.

With the game still 1-0 and just over a minute to go, Ingham stopped a Pavel Gogolev one-timer from the left face off circle.

And then in more impressive fashion, sprawled over --- with his blocker and stick stretched out --- to deny Kitchener native Eric Uba at the top of the crease before the puck was cleared (SEE VIDEO BELOW ARTICLE.)

"I think I got a little lucky," Ingham said, "But I think Birky (Athletic Therapist Cory Birk) popped my hips back in in the room, and make sure I'm going to be okay for the next game cause I think there was a little bit of a stretch going on in that."

(Ingham was speaking in jest, of course. He is okay.)

But to be honest, the saves being made by Ingham, and Guelph Storm netminder Nico Daws left many in the crowd in awe for most of the day.

In the end, the Rangers came away with a 2-1 win Sunday afternoon.

"I think both (goalies) played unbelievable, but (Daws) was exceptionally good," McKenzie said, "It was one of those games where you feel you had so many chances, and you look at the scoreboard and it's still 1-0 and it's tight."

"(Daws) played really well, and (Ingham) was unbelievable too."

It was a goaltending duel at it’s finest, but the Rangers controlled much of the territorial advantage.

He snatched the puck in the Guelph zone, circled out, came back down the middle and snapped it from just inside the blue line, going upstairs.

In a sign of a veteran’s patience, Valade realized it was late in the shift and the goal was a product of him looking to orchestrate a line change.

“I had so much speed already when I picked up going (out of the zone),” Valade says, “I thought come out, kill some time, let my linemates change and ended up finding a slot there, and got a quick shot off.”

It helped him to the game’s second star, the first time Valade was named a star at The Aud.

“Feels good to get that,” he said.

(The other two stars? As you could imagine, Daws was first with a 33 save effort, and Ingham was third after making 21 stops.)

Overall, McKenzie feels the team played “a little loose” in the first period. But in the second, despite not scoring to extend the lead, the bench boss called it “maybe our best 20 (minutes) of the season.”

In the third, the Rangers kept their foot on the gas pedal and pressed for an insurance marker.

But with four minutes to go, the home side took their first penalty of the game.

A five-minute match penalty (and likely suspension to come) against defenseman Donovan Sebrango, sending the Storm to a major power play opportunity.

The Rangers weathered the Storm surge, what was mostly a six-on-four after Daws was pulled with around two minutes left.

But it was the next sequence after Ingham’s game-saving heroics with 1:03 on the clock, that Michael Vukojevic took a puck swinging behind the Kitchener goal, and sent it 200 feet into a vacated net.

Michael Bianconi scored on a clapper with under five seconds to go, to spoil Ingham’s shutout bid.

But that’s all the Storm had left in them, as the Rangers hand Guelph their first regulation loss in 14 games.

Kitchener, meantime, have now won three straight under McKenzie, and are back in a tie for eighth in the Western Conference with Sarnia.

The tough tests will keep coming next week, as the Rangers play three games in three days, starting in Windsor Thursday night.

.@JacobIngham_’s back with a burglary 🦹‍♂️

Making his first start at The Aud in a month, the @LAKings prospect preserves an @OHLRangers lead with a sprawling save. pic.twitter.com/pwpqAQL9HO

OHL Draft Preview: Rangers ready for new recruits
Apr 3, 2020 6:30 AM
Comments
We welcome your feedback and encourage you to share your thoughts on this story. We ask that you be respectful of others and their points of view, refrain from personal attacks and stay on topic. To learn about our commenting policies and how we moderate, please read our Community Guidelines.